Maltese Historian Shut Out of Credit for Discovery

Why? That's what I want to know. What's going on here - what is the story behind this story for such crappy treatment of Mr. Tabone? Whatever it is, shame SHAME on these people who shut him out of receiving the credit that he deserves. Wednesday, 06 January 2010 Megalithic spin? Brockdorff Circle report literally rewrites history Raphael Vassallo The long-awaited official report into the excavations of the Gozo Stone (aka Brockdorff) Circle in Xaghra – a unique underground prehistoric burial site near Ggantija temples – may have rewritten Maltese history in more ways than one: by failing to properly acknowledge that the site was originally discovered by Gozitan historian Joseph Attard Tabone, whose extensive research led to its precise relocation in 1965.Launched yesterday at the Gozo Ministry, Victoria, and edited by Caroline Malone – wife of archaeologist Prof. David Trump, who oversaw the initial excavations – the 521-page volume purports to be an exhaustive collection of articles and papers related to this unique underground Neolithic burial complex. Among the contributors are: Caroline Malone; Prof. Trump; Prof. Anthony Bonanno (Malta); Prof. Simon Stoddard (Cambridge); former Archaeology Curator Tancred Gouder; and the Superintendent of Cultural Heritage, Anthony Pace. But a seminal paper written by Attard Tabone in 1965, detailing the precise circumstances of the burial site’s discovery, was neither included nor even mentioned in the entire book. Instead, the official report into the history of the Brockdorff Circle appears to have minimised Attard Tabone’s entire contribution to its discovery – limiting its only allusion to a single, fleeting line in Chapter 1 (page 5) – while concentrating almost entirely on the contributions of the Trump-led excavations from 1965 onwards. And yet it was Attard Tabone who first alerted Trump to the discovery of three previously unidentified menhirs (standing stones) in a farmer’s rubble wall in 1959; and it was also Attard Tabone who later understood the significance of the find, recognising them as the only external remnants of a stone circle that had been described in historical writings, but subsequently lost. “In 1959 I reported this megalithic wall to Dr David Trump, then Curator of Archaeology,” Mr Attard Tabone said in a 2002 interview with journalist Karl Schembri. “We inspected the site together and he included it in the 1959/60 Museum Report; but we did not realise then, that under our feet lay a great wealth of archaeological material and that this wall was part of the Gozo Stone Circle. The secrets of the site were still hidden in libraries, archives and underground.”It took Attard Tabone another five years to identify the site as part of the lost underground ruin, having established the location through visual evidence in the form of an 18th century illustration by French artist and writer, Jean Houel. Attard Tabone wrote about his discoveries in 1965, detailing the research and surface observations that led him to identify this field as the site of the complex later named the ‘Brockdorff Circle’. But he limited his contribution only to making public the exact location, leaving the actual excavation to professional archaeologists. Surprisingly, however, his crucial paper was ignored altogether by a report supposedly detailing the discovery and excavations of this unique site. Furthermore, the rubble wall in question is passed off in the text as a recent discovery, when in fact there are no fewer than three mentions in Attard Tabone’s historic 1965 paper. To add insult to injury, Attard Tabone himself was not even included in the list of official acknowledgements: only mentioned very casually in a single sentence of the introductory chapter. “How do I feel about it? Hurt, mostly,” an aggrieved Attard Tabone said when contacted yesterday. “After all that hard work - not just to discover the monument, but also to conserve it: I have had to put up with years of abuse by builders who would willingly have reduced it all to rubble, if they had their own way.... And then, after all this, to be left out completely... it’s a great disappointment.” Attard Tabone, who was awarded the Gieh ir-Repubblika medal in 2002 for his outstanding contribution to Maltese history and archaeology, did not attend yesterday’s launch (for though he was omitted from the acknowledgments, he still received an invitation). His absence did not pass unnoticed, and four of the books’ contributors – including its editor, Caroline Malone – took the initiative to pay him a visit at his residence in Gozo afterwards, to hand him an autographed copy of the book. “Their handwritten dedication does acknowledge me as the discoverer of the Gozo Stone Circle,” he confirmed yesterday; but while he admitted that this gesture, which took him completely by surprise, “changes things slightly”, he remains disappointed at the fact that official history left him out of its calculations insofar as the Brockdorff Circle is concerned. Efforts to contact Ms Malone through the offices of Heritage Malta proved futile all day yesterday. An interview with Joseph Attard Tabone from (I believe) 2005 highlights the clash between "developers" and preservationists (such as Mr. Tabone) -- could money possibly have anything to do with the petty treatment of Mr. Tabone's contributions to Maltese archaeology by the authors of the "official" report on the Gozo Stone Circle? 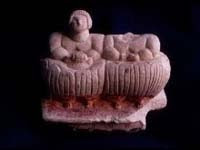 I found this image, ironically enough, in a summary of a "pod" lecture description page (Queen's University, Belfast), lecturer: Caroline Malone (see above) identified as: Brochtorff Circle, Gozo Malta -figurine PAIR. Note: I also saw Brockdorff spelled Brochtorff, and also identified as the Xagħra Stone Circle, although the Brochtorff Circle is the second one discovered there, and as I understand it (doing on the fly research), Brochtroff is the younger of the two circles.
Posted by Jan at 7:35 PM