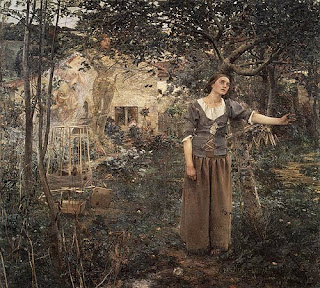 I have to say, the Met sure does hire the most charming fund-raisers, LOL!  Last year I talked to a fellow with a decided British accent and he listened with sympathy to my tale of hearing critters in the attic - that was a few days before the exterminator came.  Thankfully no critters (mice) since then, keeping me up with their scampering about on the other side of the ceiling above my bed!  Tonight I answered the phone and it was a fellow who transplanted himself from New York (still has a trace of accent) to LA - poor fellow.  We had a lovely chat about the crappy weather and the earthquake that happened about 80 miles to the south which was also felt here, 4.3 on the Richter scale, about 4 a.m.  I was blissfully unaware - it was one of the times I was actually sleeping during what was otherwise a restless night, waking up what seemed like every 60 to 90 minutes.

New York transplant man was calling about the Met's Annual Appeal, and he recommended that I do a search at the Met website for Joan of Arc, which was a painting he saw during his last (recent) visit home to NYC.  He said it looks just like a photograph.  He saw it on the second floor, and he was shocked when I told him during my four previous visits to the Met (maybe it's only three, two in 2006 and one in 2009?) I've never made it into the actual parts of the museum where the paintings are!  I've spent the bulk of my time on the first and second floor antiquities sections!

I did make a pledge, but I had intended to do so this year anyway, without any call from a charming man.  But it sure was nice to get that call.  I wonder - do they maintain files on their members - "Jan Newton.  Female of a 'certain age.'  Good for $50 a year plus her annual membership renewal of $50; likes to speak to charming gentlemen."  LOL!

I believe this is the painting of which he spoke and I do think it looks very  much like a photograph - except for those spirit 'saints' sort of hanging around in the background.  Could have been demons, for all we know.  Poor Joan, she didn't know the difference.  And in the end, it didn't make any difference.  In the face of her incredible power to inspire an entire army, the powers that be at the time were not about to let her stick around to perhaps challenge them in the not-too-distant-future.  They would have got rid of Joan one way or another - but to discredit her as a 'heretic' and then burning her to death - ahhh, now that was just too good a denouement for certain assholes to resist.  Sort of reminds me of what is going on in Iran and China today, with the latest crop of people tagged as "dissidents."