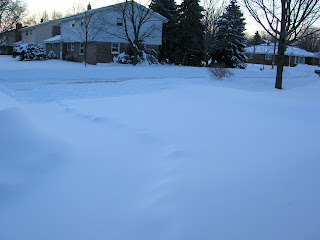 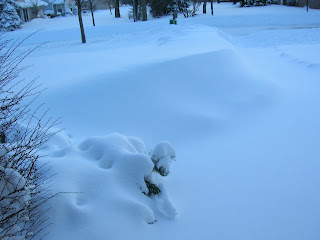 I was greeted with a great deal of shoveling out this morning - views from my front door.  In order to get to work, I had to get to get to the road.  The snow was too deep to trudge through, I had to shovel my way to the road.  Sigh. Oh, my aching shoulders.

This was on top of the shoveling I did yestereday morning and afternoon, in a vain attempt to keep the path to the road clear.  You can see the drift marks and just barely make out the line where the path I had previously shoveled stopped - about 3 feet wide.  At the end of the drive, you can just make out the sort of bumpy looking snow - that's all the snow the plow crapped up into my driveway - four feet tall and four feet deep into my 30 foot long drive.

I will be shoveling for the rest of the week.  Tonight when I got home from work, I did an aerobic 30 minutes worth of huffing and puffing, flinging heavy shovels-ful of snow over first one should and then the other.  The sun was out today so things kind of compressed and got heavier than yesterday.  I widened my path to 4 feet wide (more or less) and finished carving out the gigantic boulder that the plow had deposited on the edge of the driveway, and I started carving out a place to shovel up into the other side of the drive toward the garage.  I will mark the boundary of the other side of the driveway and then clear out toward the middle.  The snowbank on the south side of the drive is much lower than that on the north - I won't have to throw the snow up as high to get it out of the way :)  I should be finished by Sunday when the ladies come for an investment club meeting.

Hell, it could be a lot worse - I could be living in Philly or Washington, D.C.
Posted by Jan at 7:49 PM