The Playtex Moonwalk for Breast Cancer was held in London on May 15, 2010 and was a smashing success!

An incredible 15,000 places were filled in the 2010 London Playtex Moonwalk for Breast Cancer which raised about 1.6 million English Pounds for research and support of breast cancer patients and survivors - with three more events to come!  Official "Walk the Walk" website. 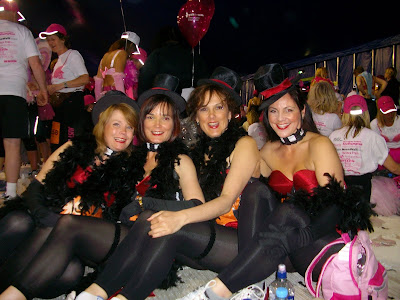 This year Goddesschess was pleased to outfit a team of four lovely ladies with "show girl" costumes (it seems the fame of those fabulous Las Vegas Show Girls reached even into the wilds of Wales), who walked the entire 26.2 mile marathon!  They all trained very hard, doing training "walks" of increasing length and difficulty as the weeks ticked by from February, our first contact, to May 15th.  As the weeks counted down, the ladies obtained pledges and when they let it be known that Goddesschess' very own Las Vegas Show Girls were providing outfits for them, interest in their quest grew.  Bambi and Candi, those fabulous Show Girls, were pleased to help and I was drafted to 'coordinate' everything.

I confess I had a few nervous moments when I finally mailed off the package to England -- I got it out much later than I'd originally planned and fears that the erupting Icelandic volcano might put a nix on all flights to England and the package of costumes, long black gloves and black feather boas would not arrive in time!  Fortunately, the package arrived ahead of schedule and best of all, the costumes fit!

Here is a report from Tracy, one of the walkers.  We are so proud of them!  Well done, ladies!

Have attached a few photos, us sitting down is in the 'Pink City' an enormous pink tent where 15000 women and a few men warm up and wait for their start time. We started at 11.30 it was a clear but very cold night (i wouldn't advise anyone be out all night in london without a lot of clothes usually!) but we were all kept warm with the fantastic reception we got with every turn we were asked to stop for photos and just generally pose as to quote 'your costumes are the best we've seen' how amazing is that?
We had to walk quite a way to queue to get into the big pink tent along a line of waiting walkers, we were met with many envious glances, many people commenting on how great we looked an a lot of rounds of applause as words were not enough!
We had a fantastic night the 26.2 miles were made a lot easier with your very generous donations of the costumes you are obliviously 2 amazing women THANK YOU.
We have raised so far over £500 and its still coming in probably about 700 when we finish double last year. (the costumes helped with that too!!)
Will send more photos later
I cant say it enough THANK YOU
Tracy, Hailey, Lynn and Amanda (last minute stand in for Emily as her horse is ill!, but costume fitted like a glove and she wore it with pride)
Not to mention the fellow walkers who enjoyed seeing our costumes the millions of people who benefit from the walk the walk breast cancer charity who have raised 80 million to date. THANK YOU

More photos to follow.
Posted by Jan at 7:57 PM