The Rape of Meroe

Excerpted from The New York Times:

Full Review
The Mysteries of Meroe
By SOUREN MELIKIAN
Published: May 21, 2010

In 1772, the Scotsman James Bruce caught sight of broken obelisks and barely discernible traces of pyramids as he traveled back from the source of the Blue Nile. These, he reckoned, had to be the remains of Meroe, known to Ancient Greek historians.

It was the Frenchman Frédéric Caillaud who, on the morning of April 25, 1822, first saw “a host of pyramids.” He accurately drew and described these in his book “A Trip to Meroe on the White River,” published in 1826. The consequences were disastrous. Antique hunters rushed to loot the site.

In 1834, Giuseppe Ferlini destroyed several pyramids. As he blew up one of these, the Italian dealer laid hands on a fantastic treasure that turned out to have belonged to Kandake (Queen) Amanishakheto. The priceless historical documentation that a proper archaeological investigation would have yielded was pulverized by the explosion and the objects were sold to museums in Munich in 1839, and Berlin in 1844.

Eventually, archaeologists stepped in. The Prussian Karl Richard Lepsius, who conducted a three-year-long campaign, produced an exemplary study of the standing monuments.

In the 20th century, a mission funded by Harvard University and the Boston Museum of Fine Arts worked out the chronological succession of the Kushite rulers of Meroe. Bronzes and ivories came to light, as well as gold jewels inlaid with mother-of-pearl and semi-precious stones that had been overlooked by looters in damaged tombs, and others preserved in funerary caches that had escaped destruction.

More important, the American expedition led by George Reisner opened up a new chapter of cultural history. No one had expected Greek and Roman objects to be found deep in black Africa. The northern necropolis of Meroe yielded a wine vessel in the form of an Amazon figure riding a rearing horse and holding a pouring vessel of the type called rhyton. This is a fifth-century B.C. piece, signed by Sotades, a potter from Athens. Stylistically reminiscent of the Parthenon marble riders, the artefact, fit for kings, was found in a royal tomb. A Roman silver wine cup of the first century A.D. from Italy turned up in the landfill of another pyramid. 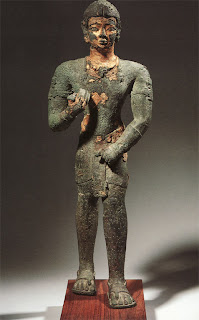 And more - much, much more... [Image: © Jürgen Liepe, from National Museum of Sudan at Khartoum, "royal archer."]

Imagine another Egypt, with a marked black African component. This is Meroe, in present-day Sudan. In art, ancient Egyptian deities appear alongside others, unknown elsewhere. The Meroitic cursive script has been deciphered, revealing that it transcribes an African language. It is related to others spoken today, like Taman in parts of Darfur and Chad, Nyima in the Sudanese Nuba mounts, or Nubian in upper Egypt and Sudan. For the moment though, it is only beginning to be partially understood.

The day a bilingual text sufficiently long to give at last a key to the Meroitic language turns up surprises are to be expected. The latest discoveries displayed at the Louvre suggest that it might not be too far off.

From the Lourve Museum website:  Meroe, Empire on the Nile
Posted by Jan at 9:06 PM