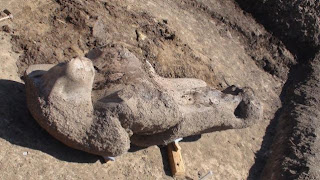 I can't quite wrap my head around this photograph - just what part of the gigantic Thoth is this supposed to be?  It doesn't look like much of anything to me, to tell you the truth.  Blame it on my bad eyesight :)

From The Telegraph.co.uk
Colossal statue of Thoth discovered at temple of Amenhotep III in Luxor
By Ann Wuyts
Monday, 17 May 2010

A colossal statue of the ancient Egyptian god Thoth, the deity of wisdom, is the latest artefact to be discovered near the mortuary temple of Amenhotep III during archaeological works aimed at controlling the subterranean water level on Luxor's west bank.

The 3.5 metre tall red granite statue is one of several artefacts discovered in the area since excavations began. The head of a 2.5 metre high statue depicting Pharaoh Amenhotep III in a standing position – possibly the best preserved depiction of the pharaoh’s face found to date - was unearthed at the King's funeral temple at Kom El-Hettan only months ago. A statue of the god Thoth in the shape of a baboon was also discovered. Last year two black granite statues of Amenhotep III were found at the temple, as well as a 5 metre high statue similar to the Thoth statue just found.

Amenhotep III ruled Egypt between 1390 BC and 1352 BC, and recent DNA and forensic research suggests that he was probably the grandfather of Tutankhamun. His temple was built closer to the river than any other temple at Thebes - right on the edge of the floodplain – and within 200 years it had collapsed. Many of its stones were subsequently removed for the building projects of later pharaohs.

The famous Colossi of Memnon, two 18-metre-high stone statues of Amenhotep III, are all that remains of the pharaoh's mortuary temple, once the largest religious complex in ancient Egypt.

In a statement, Secretary General of Egypt’s Supreme Council of Antiquities (SCA) Dr Zahi Hawass said that evidence found during the excavation suggests that more colossi could yet be found at the site. Afifi Rohayem, assistant director of the excavations, suggests that an avenue of Thoth statues could be found on the original path leading to Amenhotep III's funerary temple.

Since 1998, the mortuary temple of Amenhotep III has been on the World Monument Fund's list of the planet's 100 most endangered monuments. Extensive excavation and restoration works at the temple site are taking place.

“I believe that in less than 20 years we will have achieved our objectives here,” Dr Hourig Sourouzian, head of the conservation project, said in a video interview with Heritage Key. The final stage of the works at Amenhotep III's mortuary temple will be the creation of an open-air museum.
Posted by Jan at 8:36 PM