The Color Blue Back in the News

First, a follow-up article of sorts, on the use of ancient Egyptian blue in a 12th century CE altarpiece in a Barcelona church:

ScienceDaily (May 18, 2010) — A team of researchers from the University of Barcelona (UB) has discovered remains of Egyptian blue in a Romanesque altarpiece in the church of Sant Pere de Terrassa (Barcelona). This blue pigment was used from the days of ancient Egypt until the end of the Roman Empire, but was not made after this time. So how could it turn up in a 12th Century church?

Second, an accidental discovery of a stable and chemically "benign" blue color compound, a formula the ancients searched for in vain for thousands of years!  I found this story by accident :)

ScienceDaily (Nov. 19, 2009) — An accidental discovery in a laboratory at Oregon State University has apparently solved a quest that over thousands of years has absorbed the energies of ancient Egyptians, the Han dynasty in China, Mayan cultures and more -- the creation of a near-perfect blue pigment. 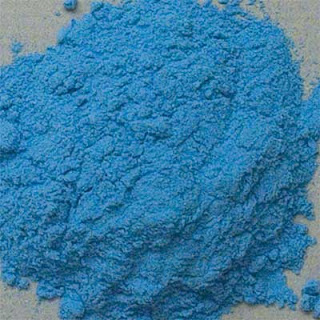 Goddesschess blog links about the quest for and the use of the color blue in different ancient cultures: