From China Daily:
Ancient general's tomb unearthed in Henan
(chinadaily.com.cn/Xinhua)
Updated: 2010-05-18 11:54
Archeologists in central China's Henan Province say they have found the tomb of a noted general from the Three Kingdoms period (220-280 AD). 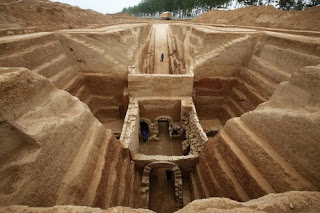 The tomb of Cao Xiu was found in Mengjin County of Luoyang City at the end of last year, said Sun Yingmin, spokesman of the Henan provincial cultural heritage bureau, at a press conference Monday.

Tests suggested the bones belonged to a 50-year-old man and a 40-year-old woman, he said. 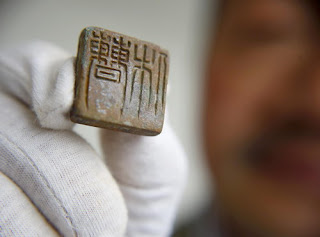 A bronze seal, about the size of a coin and engraved with Cao Xiu's name revealed the tomb owner's identity, he added.

Cao Xiu is recorded in Chinese history books as a courageous fighter and high-ranking officer. He died of illness in 228, but no record of his birth has been found.

The tomb was similar to that of Cao Cao, found in Anyang City, of Henan Province, in December, said Sun.

History books say Cao Cao took Cao Xiu as a son, though the two were not blood relations.

The discovery of Cao Cao's tomb was listed as one of China's greatest archaeological achievements last year. However, it triggered skepticism from scholars and Internet commentators who questioned its authenticity.

Experts from Shanghai's Fudan University are trying to get DNA from Cao's descendants and compare it with the DNA extracted from a skull uncovered in the tomb.

Cao Cao (155-220 AD), who built the strongest and most prosperous state during the Three Kingdoms period (208-280 AD), is remembered for his outstanding military and political talents.

Posts on Cao Cao at this blog: