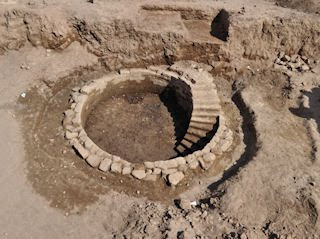 Egyptian archaeologists carrying routine excavations at the so-called “Avenue of Sphinxes,” have unearthed the remains of a 5th century Egyptian Christian church and a "nilometer," a structure used to measure the level of the Nile during floods.  (Photo: Nilometer / Courtesy of Egypt's Supreme Council of Antiquites (SCA)

Already announced by Dr. Sabry Abd El Aziz, head of the SCA's Egyptology sector, in a , the Avenue of Sphinx project involves the restoration of a 2.7-km (1.7-mile) ancient processional avenue that connects the grand temples of Luxor and Karnak on the east bank of the Nile River.

Built some 3,400 years ago, the alley was guarded on both sides by 1,350 majestic statues in the shape of sphinxes -- mythological creatures with the body of a lion and head of a human or ram.

The pathway, complete with rest places, chapels and sphinxes with ram heads, was originally built by King Amenhotep III (1410-1372 B.C.). It was then reconstructed by the 30th Dynasty King Nectanebo I (380-362 B.C.), who replaced the ram-headed sphinxes with his own head.

Divided into five sections, the path is now yielding a number of archaeological remains.

On the second section of the path, the archaeologists found the ruins of a 1,600-year-old church. The stone remains revealed that the building was constructed with recycled limestone blocks.

At the avenue’s fourth section, the team also discovered remains of a cylindrical sandstone nilometer with New Kingdom (1569-1081 B.C.) clay vessels at its bottom.

The structure, 7 meters (23 feet) in diameter, was encircled by a spiral staircase descending into the Nile. The steps allowed for a quick reading of increase in water level, thus forecasting floods.

The archaeologists also unearthed a collection of foundation stones used to install the sphinx' statues. Some of the stones were decorated with scenes depicting King Amenhotep III, who began construction on the avenue.

The fragmented sphinxes are now under restoration. Soon they will be placed on display along a section of the avenue.

“Development work at the third section of the path located behind the Mubarak Public Library is at its final stages, and it should be opened to the public soon,” Egypt’s Supreme Council of Antiquity said.
Posted by Jan at 10:10 PM