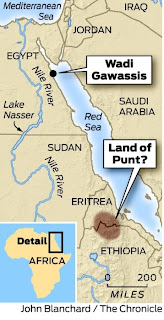 From the San Francisco Chronicle

Thousands of years ago, there once stood a place called Punt, a land of gold and ebony, and ivory, frankincense and myrrh.

To the pharaohs who built their palaces along the Nile, the Land of Punt was the source of great treasure. Among the most prized were Punt's leopards and baboons, which they viewed as sacred and took as royal pets.

The pharaohs sent great expeditions to Punt; they welcomed delegations of Puntites to their palaces, and their scribes recorded their gifts and commercial products in detail.

But not one of the Egyptian scribes who wrote about the strange land - Ta netjer, or God's Land, as it was sometimes called - ever revealed exactly where it lay.

The riddle was left to modern-day scholars to solve.

Now researchers armed with the sophisticated tools of modern physics have tackled the problem and declared that while they still can't tell exactly where Punt was, they do know where it wasn't.

Disputes over Punt's location have gone on for decades. Punt (pronounced Poont), archaeologists have said, was in Mozambique, or Somalia; or on the Sinai Peninsula or in Yemen, or somewhere in Western Asia where Israel, Lebanon and Syria now lie.

Narrowing the search
At a recent meeting in Oakland of the American Research Center in Egypt three scientists announced with confidence they had ruled out all of those five locations, and there was no disagreement from the 300 archaeologists there.

The Land of Punt, the scientist said, must have existed in eastern North Africa - either in the region where Ethiopia and Eritrea confront each other, or east of the Upper Nile in a lowland area of eastern Sudan.

The three experts, all specialists in arcane disciplines, were:

-- Nathaniel J. Dominy, a UC Santa Cruz anthropologist and primate ecologist who studies the lives and habitats of apes, baboons and other monkeys, as well as human evolution;

-- Gillian Leigh Moritz, a specialist in manipulating the mass spectrometer in Dominy's laboratory to analyze the stable isotopes of oxygen and other elements;

-- Kathryn A. Bard, a Boston University Egyptologist who for nearly 10 years has been excavating the ancient Red Sea harbor of Wadi Gawassis, where royal sailing expeditions were sent to Punt and returned with precious cargo.

The key to solving the mystery of Punt was Dominy's intimate knowledge of baboon geography - there are five species of the animals, and Dominy can identify the African regions where each one has its specialized habitat. He also knows the characteristics of the body tissue of each species.

"We used baboons as a lens to solve the Punt problem," he said. "They were among the most important commodities brought back to the pharaohs from Punt, but until now no one has known where those baboons came from."

The British Museum in London's collection of Egyptian antiquities holds two mummified baboons that were once gifts from Punt to the pharaohs, and although museum officials would not allow Dominy to drill into the mummies for bone samples to analyze their DNA, he was allowed to snip a few precious hairs from the baboons for Moritz to work on.

Clues in the water
Despite their age, those hairs still contained trace molecules of the water the animals drank when alive, and Moritz could analyze that water to determine the ratio of two oxygen isotopes in the hairs.

It's a complicated bit of chemistry, but every oxygen atom is made up of three different stable isotopes - their atomic masses - and the ratio between two of them, oxygen-16 and oxygen-18, varies significantly in the rainfall and humidity from one part of the world to another, even from different parts of a continent.

Moritz used her mass spectrometer in the Dominy lab to determine the oxygen isotope ratios in the hairs of each mummified baboon, and compared them with the ratios in all five species of baboons living in varied parts of Africa today.

"The results of the mass spectrometer showed us that the region of Ethiopia and Eritrea was the place to look for Punt," she said.

Bard, the Boston University Egyptologist, said the findings are convincing and make Punt more real than ever, but she suggests that the land might also have existed in a similar nearby baboon region - perhaps in eastern Sudan.

Remains of ships
The ancient harbor on the Red Sea where Bard is excavating is called Mersa/Wadi Gawassis, and Bard's excavations have yielded well-preserved ship's timbers, anchors, coils of ancient rope, and the rigging of seagoing ships that date from the reigns of several Pharaonic dynasties.

From that port, a pharaoh named Amenhotep IV sent a major expedition to Punt some 3,800 years ago during the eighth year of his reign, Bard and her colleagues have discovered.

"We've made a wonderful find there," Bard said. "It was really amazing - 40 cargo boxes from the ship, and some were inscribed with the name of that very king, the name of the scribe, and the inscribed words, 'wonderful things from Punt.' "
Posted by Jan at 9:41 PM

...here's an entry from linguistic
archeology, aka lingarch, aka letra. pont(Lat)=bridge, from
the nauatl pie word, potli(N)=
companion, giving rise to such
words as, pond/puddle/punt/p/foot,
pod/p/both/pontoon/p/boot=boat.
usually companions go side by side, their feet as well, a punt
in rugby may land either end of the bladder and scores 2 potli=
po(i)nts as in ammy football also.
i would have to say Punt is
located on the other side of the red sea, probably the arabian peninsula(arabia feliz).
the somalians, whom i call the
maxaad=mah/zh/zatl/t/d(letra)=
mazatl(N/day7souls), after the
language group in the middle of
somalia, now cattle herders, not
only dealt with punt but were
intimately connected with the
arabians of arabia feliz.
i don't believe the departure
po(r)t=potli(N) would be on the same side as Punt itself.
the somalians themselves don't
know where Punt is, but the answer to the question may lie with them
as their historic connexion with
the land was through kinship.
the odd shape of arabia feliz,
surrounded almost entirely by water fits the punt image.
beyond that, and before i fall
in watery puns, i better punt.

...it's Djibouti=Punt=
dji=tzi(ntli)-b/po/ut/li(letra)=
tzintli potli(N)=the saintly Punt/
bridge. what djibouti is connected
to is Punt also. got this off matilda's gobekli blog, ancient
descriptions of ancient egyptians,
bloggerDD.

...djibouti/tzintli potli/saintly
both/port/pont/Punt on the gulf of
aden=ad/ten(letra)=atentli(N)=
water lip/edge was the main crossing for the sabaea spice and perfume merchants for rome, thomas
caxton(lives of saints/first book
printed in english), sabaea=sabor(sp)=flavor=savor=saber(sp)=know.
spices came from as far as china,
the silk trail's southern fork.
djibouti=Punt=-bouti=potli(N)=
booty(pirate slang now meaning
intimate female port).
let me amend previous post
by saying, only djibouti is Punt,
the arabian side is its connexion,
but is not Punt.

....hmmm, was it William Caxton?
i borrowed the book from St. Paul's
Episcopal.