Isis sent me the update. Thanks, 'Sis. From Discovery Channel News iphone app: 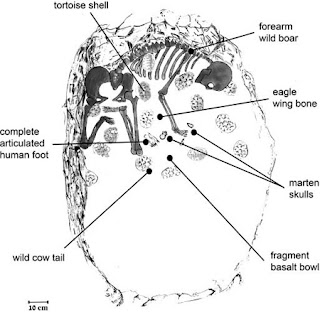 Anthropologists have unearthed the leftovers of the world's first known organized feast, which took place around 12,000 years ago at a burial site in Israel, according to a new study.  Based on the findings, approximately 35 guests ate meat from 71 tortoises and at least three wild cattle while attending this first known human-orchestrated event involving food.

The discovery additionally provides the earliest known compelling evidence for a shaman burial, the apparent reason for the feasting. A shaman is an individual who performs rituals and engages in other practices for healing or divination.

In this case, the shaman was a woman.

"I wasn't surprised that the shaman was a woman, because women have often taken on shamanistic roles as healers, magicians and spiritual leaders in societies across the globe," lead author Natalie Munro told Discovery News.

Munro, a University of Connecticut anthropologist, and colleague Leore Grosman of Hebrew University in Jerusalem excavated and studied the shaman's skeleton and associated feasting remains. These were found at the burial site, Hilazon Tachtit cave, located about nine miles west of the Sea of Galilee in Israel.

According to the study, published in the latest Proceedings of the National Academy of Sciences, the grave consisted of an oval-shaped basin that was intentionally cut into the cave's floor.

"After the oval was excavated, the sides and bottom of the floor were lined with stone slabs lined and plastered with clay brought into the cave from outside," said Munro.

The 71 tortoise shells, previously butchered for meat removal, were found situated under, around and on top of the remains of the woman. The woman's skeleton indicates she suffered from deformities that would have possibly made her limp and "given her an unnatural, asymmetrical appearance." A large triangular stone slab was placed over the grave to seal it.

Bones from at least three butchered aurochs -- large ancestors of today's domestic cattle -- were unearthed in a nearby hollow. An auroch's tail, a wild boar forearm, a leopard pelvis and two marten skulls were also found.  The total amount of meat could have fed 35 people, but it is possible that many more attended the event.

"These remains attest to the unique position of this individual within her community and to her special relationship with the animal world," Munro said.

Before this discovery, other anthropologists had correctly predicted that early feasting might have occurred just prior to the dawn of agriculture.  Harvard's Ofer Bar-Yosef, for example, found that fig trees were being domesticated in the Near East about 11,400 years ago, making them the first known domesticated crop. Staples such as wheat, barley and legumes were domesticated in the region roughly a thousand years later. Full-scale agriculture occurred later, about 10,000 years ago.

As agriculture began, however, "there was a critical switch in the human mind: from exploiting the earth as it is to actively changing the environment to suit our needs," Bar-Yosef said.

Munro agrees and thinks the change could help to explain the advent of communal feasting.

"People were coming into contact with each other a lot, and that can create friction," she said. "Before, they could get up and leave when they had problems with the neighbors. Now, these public events served as community-building opportunities, which helped to relieve tensions and solidify social relationships."
Posted by Jan at 9:17 PM

batterie-ordinateur-portable said...
This comment has been removed by a blog administrator.
September 1, 2010 at 4:31 AM