The Mask of Troy: Book Review

It's not Dan Brown... and that's not a bad thing
Reviewed by: Rebecca Walberg

The Mask of Troy
By David Gibbins
Headline Publishing, 402 pages, $35 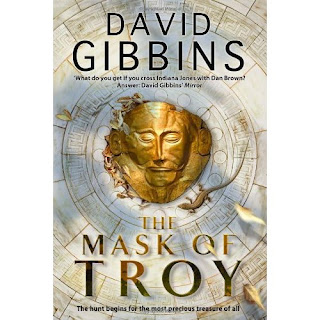 Saskatoon-born archaeologist David Gibbins' latest, his sixth history-thriller hybrid, holds up well against other entrants in the field, and rests on much more interesting ideas, not to mention authentic research, than The Da Vinci Code and its imitators.

The story opens on a secret dig at Heinrich Schliemman's excavation of the ancient Greek city of Troy in 1876, but most of the action is in the present day.

Jack Howard, a marine archeologist with access to apparently unlimited funds and a private jet, uncovers a secret that may explain not only the fall of Troy but also the real identity of Homer, the key to the Nazis' bizarre fixation on ancient history, and the secret of world peace.

It's all a bit over the top, and the sub-plot involving Howard's preternaturally wise and witty teenage daughter, while necessary to keep the characters moving from Troy to secret meetings to underwater salt mines, is also unnecessarily elaborate.

As with many similar potboilers, Gibbins' characters can be annoyingly omniscient. Some vignettes set in 1890 and 1945 feature anachronistic words and ideas, and one otherwise reasonable protagonist actually utters "what I'm about to say may be the key to the whole mystery" before pausing to make himself tea.

Gibbins hops through history just enough to provide colour and background, and generally manages to fit a good deal of exposition into the story naturally, without too many digressions in which experts pontificate to each other in order to bring the reader up to speed.

From the origins of Greek script to the prehistoric tin trade, he works obscure aspects of ancient history into unusual but provocative main argument.

Until Troy, he suggests, humans lived in the age of heroes and gods, in which battles were generally fought between individual heroes or small armies.

He also argues that the rise of iron enabled Agamemnon, the Greek leader whose death mask gives the book its name, to use new technology to destroy his foes.

Somewhat less convincingly, Gibbins also puts forward the idea that the real treasure of Troy, which war-king Agamemnon sought to destroy, was not a weapon or a religious artifact but a sort of proto-UN, in which philosopher kings met and kept peace between their peoples by agreeing to limit access to the materials needed for Bronze Age armaments.

Both the novel and the afterword also make the case that the famous Trojan Horse should be understood metaphorically.

Unlike The Da Vinci Code, The Mask of Troy doesn't read like a movie script in waiting, and that's a good thing. Relatively free of purple prose and contrived action sequences, the novel should further Gibbins' reputation as the thinking man's (Canadian) Dan Brown.

Info at Amazon.com on David Gibbins' other books.
Posted by Jan at 6:36 PM