An unfortunately too brief article that gives very little information on this interesting find.  From russia-ic.com. 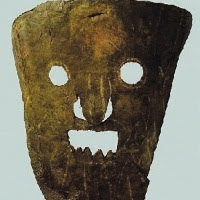 A pagan mask made almost one thousand years ago, has been found at 13th Troitsky Pit in the historical center of Veliki Novgorod.

According to the head of the pit Victor Singh, the mask with openings for the mouth and eyes, most likely, cut out from the top of a long leather boot, has been found out in the cultural layer of the 12th century. The back part of the mask has holes for small straps or cords, which were fastened at the back of the head.

“The mask was probably used during some pagan rites”, – the scientist explained.

The archeologists have already found around 20 masks.