Judit Polgar has made a conscious decision to return to playing chess events, despite knowing that with the time she wants to devote to her children and husband, she will probably never reach the top ranks again. ‘It is not easy with a child. I thought I would be back soon after my first child was born. It was strange to be off the list for a year[FIDE list of active players], during which time my sister took my place. When the second child came, I felt that if I would continue playing, it would be impossible to reach the level I want – either as a mother or as a chess player. So I decided to take a break from chess. I am coming back now. The results are not the best. In the last year and a half, I realized I can play again but not at the highest level.'

Judit Polgar’s next visit to Italy will be this spring at the new Ravenna International Chess Tournament – Lido Adriano, 2-10 April. She will play a simul on April 9th.  Here's a poster from that upcoming event: 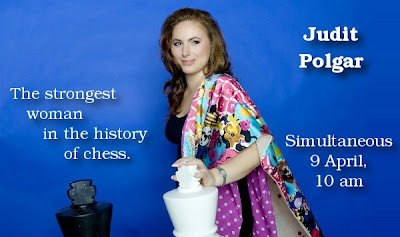