Zahi Hawass Sentenced to One Year in Prison!

Unbelievable!  It's like - every time I open up my email something totally disfunctional is coming out of Egypt.  Egypt, oh Egypt. 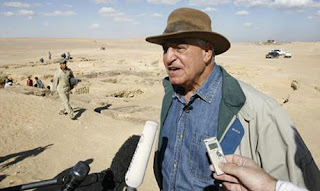 Minister of State for Antiquities Affairs Zahi Hawass has been sentenced to one year in jail on Sunday for refusing to fulfill a court ruling over a land dispute.

The Egyptian criminal court also said Hawass must be relieved of his governmental duties and ordered him to pay a LE1000 penalty.

Hawass failed to adhere to a ruling in favour of his opponent over a land dispute when he was in charge of the Supreme Council of Antiquities (SCA).

The SCA appealed the court ruling, arguing that the land includes monuments and therefore should be treated as government-owned land.

Hawass was recently re-appointed as antiquities chief in the newly-formed cabinet of Prime Minister Essam Sharaf.
Posted by Jan at 8:04 PM