The Mask of the Red Queen

Sensational photo by Selkie - thank you! 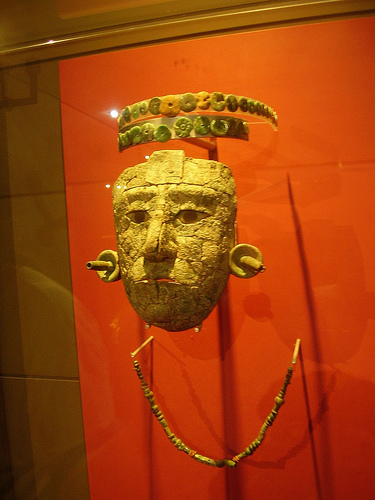 The Mask of the Red Queen and other priceless art objects/tableaus/murals are on temporary display in the Mexican National Museum in Mexico City.

From Artdaily.org
More than 1,000 Year-Old Archaeological Pieces from Palenque Studied and Restored
May 7, 2011

MEXICO CITY.- [Excerpted] Archaeological pieces created more than 1000 years ago, found at the ancient city of Palenque, Chiapas, such as the tableau of the Temple of the Cross (Templo de la Cruz), the mask of the Red Queen (Reina Roja) and a group of figurines that represent members of the Palenque dynasty, have been restored or studied parting from their display at the exhibition Six Ancient Cities of Mesoamerica at the National Museum of Anthropology, already visited by 33,400 persons.

Laura Filloy, curator of the hall dedicated to Palenque at the exhibit that will be open until June 2011, commented that this show has represented an opportunity of enhancing the value of artwork from Palenque that is part of the collection of the museums of Anthropology (MNA) and Palenque Site Museum, as well as the Community Museum at Emiliano Zapata, Tabasco.

The Mask of the Red Queen (Reina Roja)
Restorer Laura Filloy mentioned that although the funerary mask of the woman who wed Pakal II underwent restoration recently, conducted by expert Juan Alfonso Cruz, the fact of being exhibited favored new analyses.

“We took advantage of the mask being transported from Palenque Site Museum to Mexico City to conduct analyses with the support of Dr. Jose Luis Ruvalcaba, from the Institute of Physics of the UNAM, in order to study the mineral used to create it.

“Unlike other Maya funerary masks, made out of jade and jadeite, the mask of the Red Queen (made near 672 AD and discovered in 1994) was made with an unknown type of malachite; we want to know where Palenque people found it, although there are unexplored mines near Palenque that were exploited not too long ago”, explained the specialist who works at the Restoration Area of the National Museum of Anthropology.
Posted by Jan at 7:53 PM