Beautiful Women Have an Advantage in Chess...Really?

Really?  How old were the dudes that were playing chess with the attractive women?

Why Beautiful Women Have An Advantage In Chess
Business Insider
Gus Lubin
November 18, 2011

The St. Louis Fed recently posted a huge archive of economic papers. One of the papers that caught our eye was "Beauty Queens and Battling Knights: Risk Taking and Attractiveness in Chess."

Women seem not to be affected when they play an attractive woman (and the study did not test for attractive men).

The following chart shows the results when men and women played against an attractive woman with an equal chess rating. Men were significantly more likely to lose within 40 moves; after reaching the midgame their odds improved. Women showed a wide range of results without any significant conclusions. 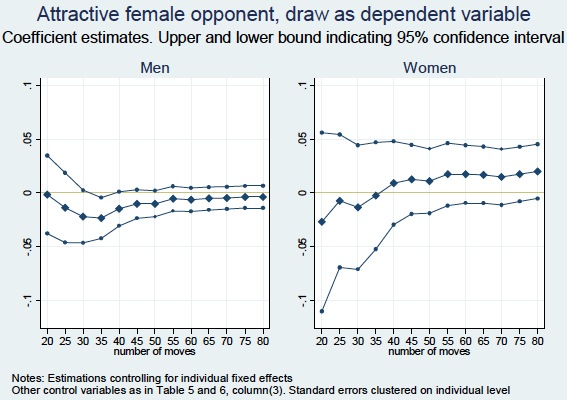 You can find a PDF of the original paper:

The IZA (Germany) is the Institute for the Study of Labor.

I don't have time to read it now.  Perhaps it may answer questions such as (1) how old were the chess dudes whose games were studied? Sixteen year olds may react a lot differently to a pair of 36D's displayed across a chessboard than a 34 year old (or at least, one certainly hopes so).  (2) Were the people who "measured" the attractiveness of the female chessplayers (ranking them in order of attractiveness) the same people against whom they subsequently played chess games?  (3) Were the male players ranked for attractiveness?

Of course, the larger question looms: how does one control for "attractiveness?"  I know there have been studies done about what constitutes an "attractive" face (in both males and females) based on facial measurements, such as the distance between the eyes, the size of lips, the size of eyes, the height of cheekbones, the degree of angles in chin and draw, and things like that.  But, really, it's a damn big world out there, and we are not all attracted to the same "looks" in a male or female.

For instance, I like a man who wears glasses; I'm pretty sure it's because initially I equate glasses with intelligence (the impression doesn't always last long); hardly anyone wears glasses anymore, though, since contact lenses are the norm and Lasix surgery is readily available. I like men with dark hair, but fair skin.  I like medium size men, not taller than 5' 10" and medium or a slighter build.  I don't like feeling overshadowed by a large man.  No muscled football players for moi!  I'm not necessarily a fan of blue eyes; must have good teeth and if he has dimples, I'm done for.

Plunk me down across a chesstable from - oh I don't know, who do women find attractive these days - George Clooney maybe?  Meh.

I have a more intriguing question to consider:  Male chessplayer make up about 92-93% of all chessplayers in the world.  Lots of room there for attractive males (of all types) to spring forth and blossom.  Female chessplayers make up the rest of the players.  So how on earth was an adequate sample of equally matched (according to ELO) male and female chessplayers compiled, and did they represent a full spread of "attractiveness" -- however that was quantified, so that the experiment was a fair one?  Off the top of my head, I'm thinking that there are are heck of a lot more attractive females playing chess than attractive males playing chess, when it comes right down to it.
Posted by Jan at 7:44 PM