Buxton's Mermaid To Be Studied

I love a good mermaid yarn!  From the BBC News. 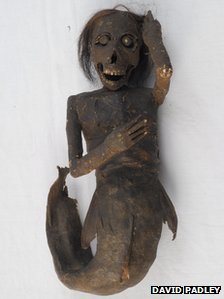 University staff and students are doing tests to uncover the origins of a museum exhibit which looks like a mummified mermaid.
They have already found the mysterious Buxton Mermaid's hair is human.
The University of Lincoln team is now testing the DNA of the mermaid's tail to see what fish it came from.
Anita Hollinshead, a conservation and restoration masters student, came across the mermaid while working at the Buxton Museum and Art Gallery.
"We think that it came from the mid-19th Century," she said. "We are still doings tests to find that out.
"She may have come from Japan or the Far East. A lot of these kind of mermaids came from that area and were made by fishermen and they sold them to supplement their income as sort of fake mermaids.
"Sometimes people bought them thinking they were the real thing.
"They were very popular side-show attractions, particularly in London in the mid-19th Century." 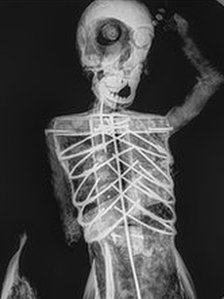 X-ray examinations have shown the mermaid's upper body is built upon a wooden and wire structure.

"The teeth are carved bone and we think the eyes are actually some sort of mollusc shell," said Ms Hollinshead.

"We didn't know if there were any bits of monkey in the top half, as there are in some of these, but that's proven not to be the case."

The team hopes further tests will determine what the mermaid's skin is made from. Their research suggests that until 1982 the Buxton Mermaid was held with a merman at the Wellcome Institute for the History of Medicine, in London.

The merman is now held at the Horniman Museum, also in London.  The mermaid and merman will be reunited at the Buxton Museum and Art Gallery for an exhibition from 19 March to 13 May.