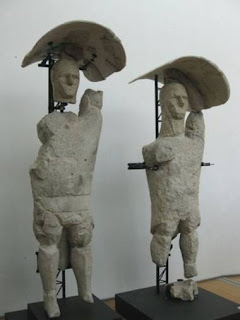 An elite force of prehistoric warriors – carved from solid rock in the western Mediterranean 2700 years ago – is rising from oblivion.


Archaeologists and conservation experts on the Italian island of Sardinia have succeeded in re-assembling literally thousands of fragments of smashed sculpture to recreate a small yet unique army of life-size stone warriors which were originally destroyed by enemy action in the middle of the first millennium BC.

It’s the only group of sculpted life-sized warriors ever found in Europe. Though consisting of a much smaller number of figures than China’s famous Terracotta Army, the Sardinia example is 500 years older and is made of stone rather than pottery.

After an eight year conservation and reconstruction program, 25 of the original 33 sculpted stone warriors – archers, shield-holding ‘boxers’ and probable swordsmen – have now been substantially re-assembled.

The warriors were originally sculpted and placed on guard over the graves of elite Iron Age Sardinians, buried in the 8 century BC. The stone guardians are thought to have represented the dead individuals or to have acted as their eternal body-guards and retainers.

However, within a few centuries, the Carthaginians (from what is now Tunisia) invaded Sardinia– and archaeologists suspect that it was they who smashed the stone warriors (and stone models of native fortress shrines) into five thousand fragments. It’s likely that the small sculpted army - and the graves they were guarding - were seen by the invaders as important symbols of indigenous power and status.

The site was abandoned and forgotten. Carthaginian control of Sardinia gave way to Roman, then Vandal, then Byzantine, Pisan, Aragonese, Spanish, Austrian, Savoyard and finally Italian rule.
The thousands of fragments were rediscovered only in the 1970s – and were excavated in the early 1980s by Italian archaeologist Carlo Troncheti. Two of the statues were then re-assembled– but the vast majority of the material was put into a local museum store where it stayed until 2004 when re-assembly work on the fragments was re-started by conservators in Sassari, northern Sardinia.

Sardinia’s newly recreated ‘stone army’ is set to focus attention on one of the world’s least known yet most impressive ancient civilizations – the so-called Nuragic culture which dominated the island from the 16 century BC to the late 6 century BC. Its Bronze Age heyday was in the mid second millennium BC - roughly from the 16 to the 13 century BC, when it constructed some of the most impressive architectural monuments ever produced in prehistory.

Even today, the remains of 7000 Nuragic fortresses (the oldest castles in Europe) still dominate the landscape of Sardinia. Several dozen have stood the test of time exceptionally well – and give an extraordinary impression of what Sardinian Bronze Age military architecture looked like.

The re-assembled stone army is expected to go on display from this summer at southern Sardinia’s Cagliari Museum, 70 miles south-east of the find site, Monte Prama in central Sardinia.

Many of the stone warriors are armed with bows or protected by shields –and wear protective carved stone armour over their chests and horned stone helmet over their heads. Some of the fighters – those believed to portray boxers – carry shields in their left hands, held aloft over their heads.

These‘boxers’ may well have represented or embodied shield-bearers serving the high-ranking members of the Sardinian Iron Age interred in the adjacent graves.

There were also a series of at least ten model Nuragic castles of different designs – some single-towered and others sporting more elaborate‘multi-tower’ fortifications.

The ruling elite of this part of Sardinia may well have been a relatively tightly knit group of closely related individuals. For scientific work carried out on the skeletal material at a laboratory in Florence, suggests that most of the dead individuals were from just two generations of a single extended family.
Posted by Jan at 11:22 AM