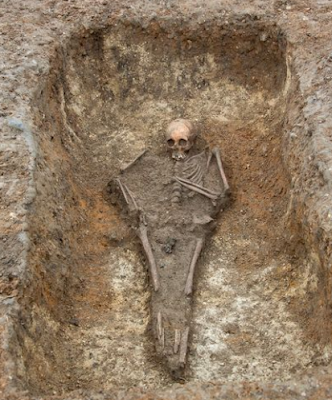 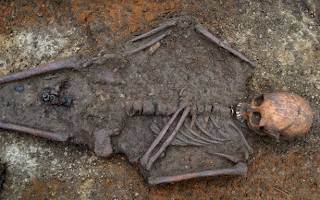 The skeleton of a young Christian noblewoman, who was laid to rest on a "burial bed" some 1,400 years ago, is giving archaeologists precious clues to the earliest days of the English church.

Unearthed in 2011 in a village near Cambridge, the teenager wore the badge of her faith in the shape of an exquisite gold-and-garnet cross, found on her chest and just visible in the picture above. The ornate treasure marks the grave as one of the earliest known Christian burials in Anglo-Saxon England, researchers from the University of Cambridge announced last week.

Christians previously lived and died in Britain under Roman rule. But the newfound grave dates to the mid-seventh century, when Anglo-Saxons—the Germanic peoples who founded the English nation and language—were starting to convert to Christianity.

In addition, the wooden burial bed on which the 16-year-old was placed is one of only a handful of such finds discovered in Britain, the team says.