Chess Femme News From Around the Net

At Chessbase, the City of Montreal Open Chess Championships' newest sweetheart reports on the Reykjavik Open, in which reigning Women's World Chess Champion, GM Hou Yifan of China, played:
Alina L'Ami hears the Call of the North
20.03.2012– The Reykjavik Open 2012 took place from March 6–13, and our playing correspondent WGM Alina L'Ami sent us a number of beautiful reports from the Icelandic capital. She was obvious so enthralled by the Nordic country, its people and landscape, that she has written one more massively illustrated report. It is filled with a yearning to go back to Reykjavik next year.


Also at Chessbase, a report on the 2012 European Individual Women's Blitz Chess Championship, won by :

Gaziantep: Gunina overtakes Pähtz, wins European Women's Blitz
19.03.2012– She already won the title in the classical time controls, now Russian IM Valentina Gunina added the Blitz title to it. In the final round she was able to defeat former women's world champion Antoaneta Stefanov 2-0 and overtake the leading Elisabeth Pähtz. The German IM will remain in Turkey, since she has signed a contract to train young talents. Big pictorial report.

Aleksandra Goryachkina, born in 1998, has just conquered her last norm for WGM title at the European Women Chess Championship. The young Russian girl finished at the amazing 40th place with 6,0/11, competing with a large number of GMs and IMs in what is considered to be the strongest EIWCC in history.

Elizabeth Vicary's blog is chock-full of chess news of "Her Kids" in NYC, and very promising news and reviews on "Brooklyn Castle," which could be a major game-changer for I.S. 318:

Monday, March 19, 2012 NPR review of Brooklyn Castle! also
SXSW Film: 'Brooklyn Castle' And The Looming Threat Of Commercial Success
If I could pick only one film from the South By Southwest film festival and bodily force everyone I know to see it, it would be Brooklyn Castle, a documentary directed by Katie Dellamaggiore that follows the chess team at I.S. 318, a New York junior high school that has become a superpower at national tournaments.

... I have a gnawing fear of seeing somebody like Charlize Theron (an actress I really like) as the woman who coaches the kids in chess. (!!!!) 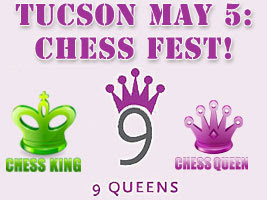 Press Release: 9 Queens brings Chess Queen Alexandra Kosteniuk to celebrate Tucson’s chess community. Alexandra will be honored at the 5th Annual Chess Fest and will receive the 9 Queens Award. The event is sponsored by the Soroptomist International of Desert Tucson and Chess King software. Read the full press release below and mark your calendars if you can make it to Tucson on May 5!
Posted by Jan at 7:56 PM