More on the Thefts of Chinese Antiquities from British Museums

I didn't see these items make the regular archaeology news, so I hunted around a little at BBC.  Here are several links to articles discussing the Durham theft and the arrest of five people and the recovery of stolen items from the Oriental Museum on April 5, 2012, as well as the subsequent Fitzwilliam Museum theft: 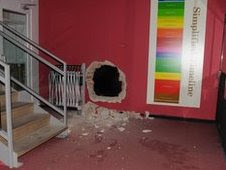 Durham University Oriental Museum treasures recovered
April 14, 2012
Chinese artefacts worth almost £2m that were stolen from a University of Durham museum have been recovered by police.

Thieves cut a 3ft-wide hole in the wall of the university's Oriental Museum and stole a bowl and figurine. Durham Police said it was almost certainly a well planned operation.

A police spokeswoman said both artefacts had now been recovered.

Officers have arrested five people in connection with the theft [When were they arrested?  Before or after the Fitzwilliam Museum "raid" on April 13th?]  Two men are still being sought.

Durham University Oriental Museum reopens after burglary
April 16, 2012
(Let us hope that the hole through the wall was adequately patched up?)

Durham museum raid inquiry: Two cars recovered
April 18, 2012
This article reveals the tasty little tidbit that the two artifacts stolen from the Oriental Museum-Durham were "found in a field."

Fitzwilliam Museum theft: Up to four burglars involved
April 20, 2012
Detectives said the burglars had entered the back of the building at about 19:30 BST on 13 April.

Officers said the group was inside the building for a "matter of minutes" before fleeing in a getaway car.  [Evidently they just walked in through the back door?????]

Fitzwilliam Museum theft: White van 'used by raiders'
April 23, 2012
The van in question was stolen in London on April 7, 2012. Had it been planned for that long of a time to use this van in committing the "raid" on the Fitzwilliam???

Fitzwilliam Museum £18m theft: Haul 'likely to still be in UK'
By Mark Bulstrode April 26, 2012
This story is so full of beans, I can't even frame suitably pungent comments, har :)

Soooo, there you have it, folks.  Somehow, it is not comforting to know that police in the UK are just as incompetent as the police in the USA.  Keystone Cops, anyone???
Posted by Jan at 1:35 PM