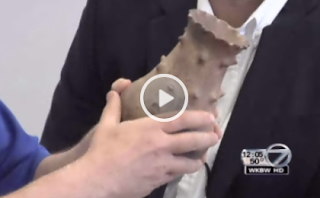 It's not just any old flowering pot.

"The vase could be anywhere from 1,000 to 1500 years old. A note inside the vase said it was found at the Spiro Mounds in 1970. We did research to discover that was an old Indian burial grounds," Victori said.

The vase came all the way from Oklahoma. Victori contacted the Oklahoma government, who directed him to officials with the Caddo Indian Nation. They then claimed the vase.

Victori said according to the Native American Grave Protection and Repatriation Act, it is illegal for an organization like Goodwill to sell the vase, or other items belonging to any Native American group.

"We are going to donate that vase to their museum in Oklahoma," Victori said.

This is not the first time Goodwill Industries has found some unique items. Victori said with all the donations that come in, there are bound to be some interesting discoveries.

"We did find some expensive paintings from a local artist a while back. A book by Elbert Einstein written in German and an autographed copy of Mickey Mantel's book," Victori said, were just some of the items they have found.

The organization was able to sell those items at ShopGoodwill.com for hundreds, even thousands of dollars. As for the vase, it will go back to its rightful owners, the Caddo Nation. They will then decipher what it was used for and the exact age of the artifact.

"In turn they are going to give us a plaque, that will be displayed proudly, thanking Goodwill Industries of Western New York," Victori said.
Posted by Jan at 8:54 PM