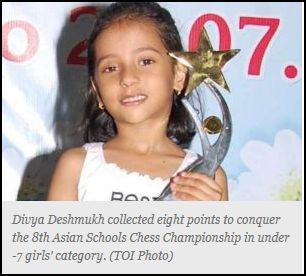 NAGPUR: City's little wonder and National under-7 champion Divya Deshmukh once again made the Orange City and the country proud when she became the Asian chess champion in New Delhi on Wednesday.

With eight wins and a defeat, Divya collected eight points to conquer the 8th Asian Schools Chess Championship in under-7 girls' category that concluded at the Indira Gandhi Indoor Stadium in the Capital. In addition, she dominated the five-round blitz event to claim the second international gold.

Daughter of gynaecologists Namrata and Jitendra Deshmukh, Divya for the first time started realizing the title winning effort of any player. In her only reaction to TOI, the 1st standard student of Bhavan's Bhagwandas Purohit Vidya Mandir said, "I am very happy I won gold medals for India."

Delighted with Divya's triumph her mother Dr Namrata said, "we are very happy for our little wonder. After winning the standard event in the morning, second gold in the blitz event was icing on the cake. I was with her since the start of the tournament and as she was doing well her father also joined us. With me being alone, I need to perform the dual role of a parent as well as coach. I only told her to play her best."

She further added, "though Divya is young, she has begun understanding worth of winning. After the victory her first call was to elder sister Arya saying: I have represented India and won gold medals." After winning the national U-7 crown in July, Divya was made to work harder by her young coach Rahul Joshi for the Asian tourney where 415 players from 11 countries took part in various age categories.

The nine-round tournament organized on behalf of Asian Chess Federation by the All India Chess Federation under the aegis of FIDE was played in Swiss league pattern. With 1401 Elo points Divya started as a third seed behind state mate and top seed Bhagyashree Patil (1492) with Delhi's Jesica (1469) being the second seed.

With an easy victory over Kriti Patel, Divya, playing with the black pieces, got off to a rousing start in the first round and defeated Mirlankyzy Azaliia of Kyrgyzstan in the 9th and final round to win the coveted Asian crown for Orange City.

On her way to the gold medal winning effort, Divya defeated Shitika Raj, Chinnam Vyshnavi, A Ahalya, Bhagyashree Patil, Jesica and Sri Lanka's Gunathilake MD Wonara for the full eight points. In the 7th round, however, Divya was surprised by Gujarat's Ananya Parikh but the confidence of stunning her higher ranked rivals in the earlier rounds already gave her the crucial advantage with points.

Divya was way ahead of silver medalist Bhagyashree who had a tie at 6.5 points with Chinnam Vyshnavi of Andhra Pradesh. In the blitz event, Divya had an all win record to be on top of the table.

With the national triumph earlier this year, Divya has been already picked to represent India in the world and Asian under-8 championship in 2013. With this title she, along with the podium finishers, will represent Asia in the World Schools Chess Championship in Greece next year.

About her future, Dr Namrata said, "as first step, we just want she should perform well in world championship next year. Her coach Rahul Joshi works very hard and with full support of school authorities we managed to make her more focused. All thanks to school principal Anju Bhutani madam and Bokare sir. It becomes very difficult if schools do not encourage but they are very helpful."

On Divya's other interests, her proud mother adds, "she idolizes Viswanathan Anand and nowadays she likes Carlsen. Also she loves to dance and play like any other kid. Divya also loves to watch the movie on Bobby Fischer." Divya practices at Anand Chess Academy under Joshi. Members of the chess fraternity congratulated her for the double delight as she is the first in Vidarbha to achieve this remarkable feat in any category.
Posted by Jan at 8:19 PM