I Missed the End of the World AND the Winter Solstice

Geez, there's just no telling what may happen once I start cleaning the house and getting ready to entertain.  I totally missed the end of the world, for instance.  I waited for it to come all day while at the office but nope, totally missed it.  It must have happened either when I was sleeping or later on last night when I was laying the dining table for lunch today, putzing around with tablecloths and placemats and trying different centerpiece arrangements.  Hmmm.....  Ancient Mayan joke:  What comes after a Baktun?  Answer:  Another Baktun, bwwwaaahhhaaaaaa!  Well, okay, it sounds funnier in my head when I tell it to myself :)

Evidently the modern-day Mayans believe that the end of a baktun is just the start of a new era, rather like 1999 rolling around to 2000.  Oh wait - weren't there millions of people thinking the world was going to end THEN, too?  Planes were going to fall from the sky, computers were going to explode, we were all going to starve because everything would stop working, etc. etc.  Geez.

I also totally missed the Solstice.  Forgot all about it, in fact.  I knew it was coming, because I had commented about it to someone at the office on Thursday that the days that would finally start to get a little longer each day.  The worst is over now, except for below zero temperatures that usually happen around here in January and February and, of course, snow storms.  Don't know how I'm going to cope with those since I am under orders to not ever do any snow shoveling ever again.  So today I shoveled, but only a little, because there was only a little snow in my driveway.  And it's frozen hard.  The first great blizzard of 2012 in Wisconsin missed Milwaukee but left a lot of rain, sleet, slush and about an inch of wet heavy snow on top of all that froze overnight and Friday morning when I walked down the driveway headed toward the bus to go to the office, it was crunch crunch crunch.  I probably should have gotten up at 4 a.m. and shoveled out.  Nah.

So this morning the sun was warm even though the temperature was cold.  I pulled out my trusty old shovel and headed outdoors, soon working up a sweat.  It was mostly useless exercise, I hardly was able to scrape up any of the frozen snow.  Oh well.  I put down some salt and hope it will be sunny tomorrow and it will melt away.

Lunch today, however, was a great success.  I love entertaining.  I should do it more often.  I enjoy cooking and cleaning to get the house ready for guests doesn't feel quite so boring and burdensome as necessary dusting and vacuuming once a week.  Must do that tomorrow.  During the Packers game.  If they are doing badly and I don't want to hear the announcers (the t.v. announcers suck anyway), I just turn on the vacuum and go to it!  If I get curious, I can always take a peek at the t.v. out of the corner of my eye.

Anyway, some 5,000 people showed up for the Solstice at Stonehenge, which according to this BBC article, is about five times as many as the usual crowd.  Were they expecting maybe the earth to move beneath their feet and swallow them all up or something?  Take a look at this motley group: 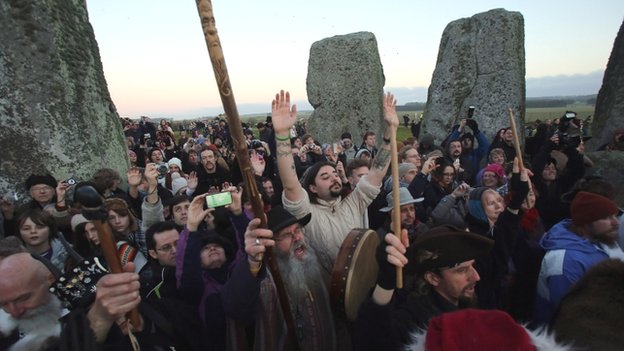 I wouldn't these guys as extras for a zombie movie, geez!  Does the dude with the cheap imitation pirate hat really think that back scratcher is going to - well -- what, exactly?  LOL!  Maybe he was hoping to use it to pick up women's skirts surreptitiously, only no chicks showed up wearing skirts.  I mean - skirts at Stonehenge in winter?  Ha!  I'm thinking the stones were all rather relieved once this group dispersed, yeah, the nutters are gone for another year...
Posted by Jan at 5:57 PM