Very interesting discovery.  The well-preserved wooden timber-joined pieces were put together using tenon and joint techniques that is still in use today, with the aid of stone adzes and bone chisels -- long before the first use of metal was discovered. 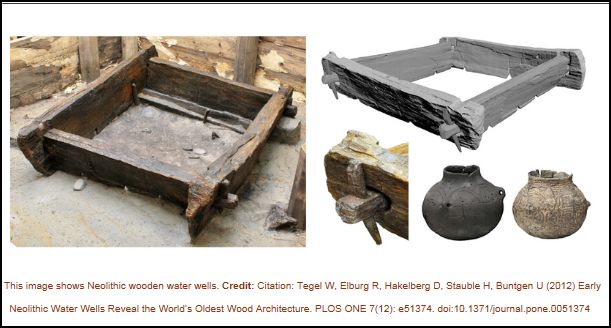 Anyone writing a book about the history of carpentry may want to include these latest discoveries in the first chapter: Wooden water wells made out of oak timbers dated to over 7,000 years ago were discovered in eastern Germany, and their workmanship suggests an unexpected sophistication in carpentry skills for Neolithic farming communities of the time. The oak timbers, 151 in all, were preserved in a waterlogged environment were dated to between 5469 and 5098 BC.

"This early Neolithic craftsmanship now suggests that the first farmers were also the first carpenters", a study of the finds reports.

Moreover, they were made long before metal was discovered and used in the manufacture of tools that would have been used to fashion and construct the wells. It challenges previous assumptions that metal tools were required to create more complex wooden structures, such as these wells.

So how were they made without metal tools?

They were made by using stone adzes of at least two different sizes to produce finely cut timbers and then employing sophisticated wooden corner joining and log constructions through wedge tusk tenon joints and interlocked corner joints. Examination of tool marks also suggests the use of bone chisels in the process. Even today, certain kinds of carpentry are employed in this fashion without nails, screws and power tools, although metal tools are most often used.

According to the study report and reports of previous studies and investigations, the first Central European farmers journeyed from the Great Hungarian Plain about 7,500 years ago, leaving behind settlement structures with longhouses, pottery (called Linear Pottery Culture, or LBK) and stone tools for archaeologists to uncover through excavations in various locations across the more fertile areas of present-day Europe. Little remained of the longhouses, other than their characteristic "footprints" in the soil. But the wells, having survived nearly intact after thousands of years in their underground waterlogged environments, left a comparatively well preserved record of the technology and techniques used by the Neolithic farmers as carpenters.

Despite these finds, however, relatively little is known about these early settlers, their environment and their technology and culture. But the oak timbers analyzed in the study preserve a record, in the form of tree rings, of the environment in which they lived, holding the promise of reconstructing a picture of the world in which the early Neolithic settlers lived and what natural resources may have been at their disposal.

The research is published in the December 19, 2012 issue of the open access journal PLOS ONE by Willy Tegel and colleagues of the University of Freiburg, Germany, as Early Neolithic Water Wells Reveal the World's Oldest Wood Architecture.
Posted by Jan at 6:37 PM