A day off today, unfortunately, feeling decidedly under the weather. Well, that will happen from time to time with my heart condition, but it still fricking sucks!

The plus is that I was able to boot up a laptop and listen to the live coverage, and sometimes managed to watch some of it (exhausting).

But I'm feeling better this evening.  Much to report, no energy though.  So, cutting to the chase, here is the poop scoop at the moment: 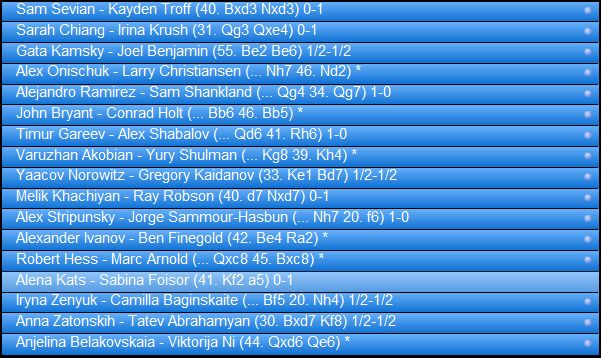 Krush defeated Sharah Chiang, as expected, but Chiang made it easier making a blunderous queen move, from c4 to b3 on white's move 29.  Krush goes into the rest day at 5-0.  Kudos to Krush.

It appeared for awhile that Kats was surprising the hell out of Foisor, but with little commentary on the game and my analyzing skills non-existent, can't really tell you anything other than that Kats went down to defeat behind white before making her 42nd move.

Zenyuk-Baginskaite was a peaceful draw.

The marquis game of the day, at least in my eyes, was Zatonskih v. Abrahamyan, which ended in a draw after move 30.  Only in order to satisfy the Sophia rules in force for this tournament.  I can only wonder what Abrahamyan will do in the second half.  Oh, and I was shocked to Hell and back today (not good for my heart, darlings) when I saw that Tatev had cut off her luxorious gorgeous thick dark long hair to a - bob - of all things.  Holy Hathor!  Not to say it's not a flattering cut, but I haven't seen a photo of her front on yet, so I'm reserving judgment.  But - Holy Hathor!  To my mind, this is a totally rad move and can only signal - a rad shift in mind set...


That draw is significant, BTW.

Belakovskaia lost!  She succumbed to Ni after Ni made her 73rd move with the black pieces.  Quite a battle.

Here are the standings after R5:


Abrahamyan's draw today secured her clear second place and crucial hours more than Krush to rest and restore herself, as well as study-up on the remaining opponents. Round 8 is now looming large for Krush and Abrahamyan, as Krush is perfect with 5-0.
Posted by Jan at 5:22 PM