Play resumed today with R6, and the ladies wasted no time (or some of the gents, either, for that matter), mixing things up and adding some exciting possibilities for grand denouements a few rounds from now!  Too tired to cut and paste out of this shot from the live coverage, so here are all of the players' match-ups and results: 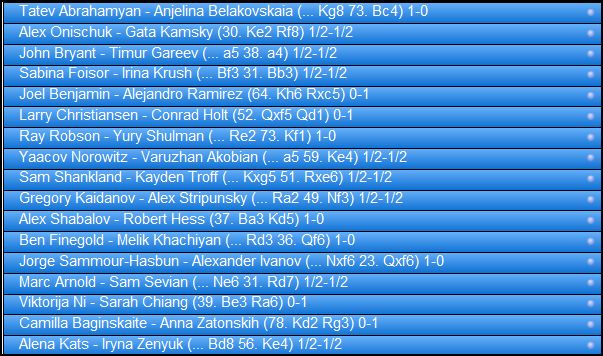 Here are the women's standings after R6:


I'll leave it to the chess pros to analyze Irina Krush drawing Sabina Foisor in 31 moves in their game today when she has Tatev Abrahamyan breathing down her neck.  Abrahamyan, meanwhile, had a long game on her hands with Anjelina Belakovskaia because Anjelina doesn't resign easily (more on this in a few moments).  In the end though, Belakovskaia resigned and Tatev took the full point.  She is now within half a point of Krush.  The round 8 match between Krush and Abrahamyan now looms large but, as Tatev pointed out in her post-game interview with GM Maurice Ashley, she could lose her game tomorrow.

Tomorrow Tatev plays Sarah Chiang, who scored her first point today, a victory with black against Viktorija Ni.  Anna Zatonskih also had a victory today with the black pieces against Camilla Baginskaite to pull within half a point of second place and one point away from Krush.  Alena Kats' game against Iryna Zenyuk ended in a draw, despite Kats having an earlier large time advantage, but coming up with a winning strategy was not going to be easy according to some commentary I was able to listen to shortly after 4 p.m. while still at the office.

What I've found most interesting about this championship is what appears to be the total lack of intimidation factor on the part of the newcomers to the championship.  Earlier today, GM Maurice Ashley made a point of talking about the high percentage of decisive games played by the women -- it was in the high 70's percentage wise, higher than the 60's percentage of men's decisive games which he had previously noted as being higher than normal, and particularly noting the fighting spirit and take-no-prisoners attitude of the young players like Sevian and Troff!  He also made a point in earlier commentary (it was either in this past Saturday or Sunday's live online coverage) about how he approved of the Sofia rules in place for the U.S. Championships (no draw before move 30 unless an arbiter agrees it's a drawn position) because implementation of the rule has sent a strong message to the higher-rated players that "grandmaster draws" are frowned upon and will actively be discouraged, and he indicated he had seen a sort of "sea change" in player attitudes toward draws at the top levels of chess as a result of more high-powered tournaments adopting the Sofia rule to discourage quick draws.

But then today he turned around and made what I consider a totally out of line comment during his post-game interview with Tatev Abrahamyan (who defeated Belakovskaia about whether Belakovskaia's continuing to play on after she was "down a major piece and a pawn" instead of resigning was a sign of disrespect!  Of course Tatev refused to answer such a ridiculous question.  Has Ashley forgotten that Belakovskaia is a three-time U.S. Women's Chess Champion?  A player doesn't achieve three national champion titles without having a strong fighting spirit, and he should know all about fighting spirit, after all, as he was the very first black chessplayer in the United States to earn a GM title.

So maybe Belakovskaia could have - should have? - resigned somewhat earlier?  Maybe, but when, then?  Would a majority of players agree as to WHEN she "should have" resigned?  Then, I took a look at her games thus far in this championship, and few of them are 36-move decisive games.  Speaking of which, many of the other players' games aren't either!  What about Kats v. Krush in Round 1, which went 82 moves before Krush received the point?  Also in Round 1, Abrahamyan v. Foisor went 87 moves before Abrahamyan won with white.  In Round 2 Foisor v. Belakovskaia resulted in victor to Belakovskaia in 63 moves.  In Round 4 Baginskaite v. Kats was 79 moves that ended in a draw.  And in R5 Belakovskaia v. Ni lasted 73 moves before Ni won the point.  It's not just one particular player in this Women's Championship who is playing long drawn out games!

So where does GM Ashley get off suggesting that Belakovskaia should have rolled over and played dead long before she resigned in her Round 6 game against Abrahamyan?  Badly done, sir, badly done.

Here are the pairings for R7: