Thoughts on the Resurrection of Tabitha

Hola darlings!  It's Saturday, and I've been enjoying it despite the unseasonably cool, clammy weather.  June 8th and it didn't get up to 70 today; night-time temperatures tonight will drop into the 40's once again.  Sigh.  And tomorrow, rain.  More rain...

I visited Biblical Archaeologal Review's website this evening to see what's new and came across this very interesting article on the resurrection of Tabitha, also known as Dorcas, one of the few female disciples of Jesus Christ mentioned in the New Testament.

Tabitha in the Bible
A Disciple Known for Doing Good

Robin Gallaher Branch • 05/28/2013
The article by Dr. Branch is very interesting.  I can't say I was familiar with the story of Tabitha a/k/a Dorcas, although I may have learned of it perhaps back in catechism classes many many moons ago!  I highly recommended Branch's account of the resurrection and how excellently she gives a feel for the time and place surrounding the biblical account.
Here is summary of the resurrection account from another source:
DORCAS

(Dor′cas) [Gazelle].
A Christian woman in the Joppa congregation abounding in “good deeds and gifts of mercy,” evidently including the making of inner and outer garments for needy widows. (Ac 9:36, 39) “Dorcas” corresponds to the Aramaic “Tabitha,” both names meaning “Gazelle.” Possibly Dorcas was known by both names, as it was not uncommon then for Jews, especially those living in a seaport such as Joppa with its mixed population of Jews and Gentiles, to have a Hebrew name as well as a Greek or Latin name. Or, Luke may have translated the name for the benefit of Gentile readers.
Dorcas is the only woman mentioned in the Scriptures as having the feminine form of the word “disciple” applied to her. This, however, does not mean that she held a special position in the congregation, for all Christians were actually disciples of Jesus Christ. (Mt 28:19, 20) Though her death in 36 C.E. caused much weeping among the widows who had apparently benefited greatly from her kindnesses, the fact that no mention is made of sorrow on the part of a husband suggests that Dorcas was unmarried at the time.

At her death the disciples at Joppa prepared her for burial and, on learning that Peter was in Lydda, about 18 km (11 mi) SE of Joppa, sent for him. Undoubtedly they had heard about Peter’s healing the paralytic Aeneas there, and this may have given them a basis for reasoning that the apostle might resurrect Dorcas. On the other hand, they may have turned to Peter simply for consolation.—Ac 9:32-38.

Following a procedure similar to that used by Jesus in resurrecting Jairus’ daughter (Mr 5:38-41; Lu 8:51-55), Peter, after dismissing everyone from the upper chamber, prayed and then said: “Tabitha, rise!” Dorcas opened her eyes, sat up, and took Peter’s hand to rise. This is the first reported resurrection performed by an apostle, resulting in many becoming believers throughout Joppa.—Ac 9:39-42.
http://wol.jw.org/en/wol/d/r1/lp-e/1200001214
http://wol.jw.org/en/wol/s/r1/lp-e?q=Tabitha&p=par
After reading Dr. Branch's article I immediately turned to Babara G. Walker's The Woman's Encyclopedia of Myths and Secrets, but did not find anything in it about Tabitha, Dorcas or "gazelle."  The first "Tabitha" who came to mind was from the popular old t.v. show "Bewitched," LOL!  Sort of the antithesis of the idea of the saintly biblical Tabitha, heh?
I also recalled that the traditional and yet quite extraordinary female warriors of the Pesians and Arabs, "The Hind of Hinds," were named after a gazelle.  Isn't it interesting that Islam, a religion that today so denigrates females and relegates them to lives spent permanently covered up head to foot in chadors and such should, in its early history, feature such striking warrior women!  I've written plenty about the Hind of Hinds:
Thursday, February 28, 2008 The Hind of Hinds
Friday, February 29, 2008
The Hind of Hinds - Continued
Friday, February 29, 2008The Hind of Hinds - Continued
Friday, February 29, 2008
The Hind of Hinds - Continued
Friday, February 29, 2008
The Hind of Hinds - Continued
Saturday, March 1, 2008
Hala Sultan Tekke: Shrine of the Mother's Breast
Saturday, March 1, 2008
The Black Stone at Mecca
Sunday, August 7, 2011
A "Jewish" Warrior Queen: Kahena
I snipped these interesting bits of information about the semitic fondness for gazelles in a 1923 book during a google search "Studies in Biblical and Semitic Symbolism" by Maurice H. Farbridge.  This first snip is from page 70: 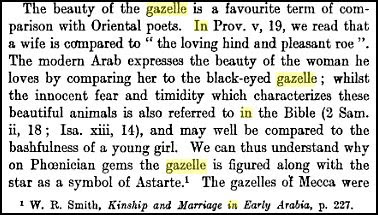 This second snip is from page 71: