Absolutely incredible.  To think these beautiful pieces had survived 1800 years buried in the ground!

The Backworth Hoard: Roman Treasure On Display In North East For The First Time 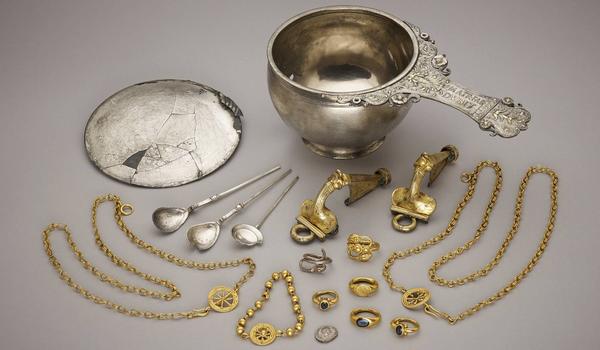 The Backworth Hoard, a stash of exquisite Roman treasure buried on Tyneside 1,900 years ago, has gone on display in the North East for the very first time.

The collection is on loan from the British Museum and can be seen at Segedunum Roman Fort in Wallsend between May 24 and September 15.

The hoard was found in 1812 and is a personal collection of jewellery and precious ornaments, buried on the Roman-Barbarian frontier by a mysterious, wealthy owner.

Geoff Woodward, Manager of North Tyneside Museums at Tyne & Wear Archives & Museums said: "It's very exciting that these beautiful precious objects are going to be returning to the area where they were buried nearly 1,900 years ago.

"They are high status objects that demonstrate the wealth and power of an individual living at the eastern end of Hadrian's Wall.

"The circumstances of their burial give us a connection, albeit shrouded in mystery, with that individual and a glimpse into the murky overlap of cultures on this key frontier of the Roman Empire.

"We're delighted to have been able to work in partnership with the British Museum to create this fascinating exhibition."

"As a probable temple treasure, dedicated to the shadowy Mother-Goddesses, it is not only of great rarity but also enigmatic, beautiful and fascinating.

"The Treasure is still a key part of the British Museum's Roman Britain display, and we are extremely pleased to collaborate with our partners at Segedunum Roman Fort to display it temporarily for the benefit of those living in the region where it was buried so long ago."

The Backworth Hoard is of national significance, and features gold and silver artefacts such as a silver pan, spoons and gilded silver brooches that were believed to be treasure deposits from a pagan shrine.

It forms the centrepiece of an exhibition that examines the complex relationship between the Romans and their environment, the native people and the indigenous deities of northern Britain.
Posted by Jan at 7:53 PM