A Brief History of Scotland Yard 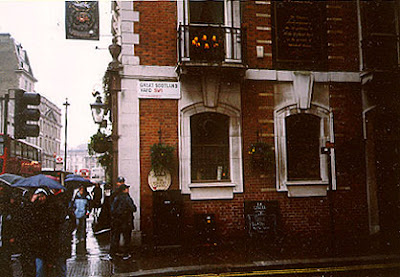 During an 8-hour stop-over in London enroute to Madrid in October, 2002, Don and I took the Tube from Heathrow to Picadilly Circus and took a whirlwind tour of the City. We walked past Great Scotland Yard - he snapped a picture of the street sign (pub sign above, lol). It's not the best photo in the world - it was raining that day (as you can see from all the umbrelllas) and darkish, even though it was only about 1 in the afternoon.
Here's a brief article from the Smithsonian online about Scotland Yard:
Investigating London's famous police force and some of its most infamous cases
By Jess Blumberg
Smithsonian.com, September 28, 2007
The name Scotland Yard invokes the image of a foggy London street being patrolled by a detective in a trench coat puffing smoke from his pipe. But Scotland Yard has an easily muddled history, full of misnomers and controversy. Neither in Scotland, nor in a yard, it is the name of the headquarters of London's Metropolitan Police and, by association, has become synonymous with the force. The Yard doesn't serve the city either, but instead the Greater London area. With all this confusion, it's time to investigate the story of Scotland Yard and some of its most infamous cases, from Jack the Ripper to the 2005 London bombings.
Making the Force
The London police force was created in 1829 by an act introduced in Parliament by Home Secretary (similar to the U.S. Secretary of the Interior) Sir Robert Peel—hence the nickname "bobbies," for policeman. The new police superseded the old system of watchmen. By 1839 these men had replaced the Bow Street Patrols, who enforced the decisions of magistrates, and the River Police, who worked to prevent crime along the Thames.
The responsibility of organizing the new police force was placed on Colonel Charles Rowan and Richard Mayne, who occupied a private house at 4 Whitehall Place, the back of which opened onto a courtyard: the Great Scotland Yard. The Yard's name was inspired by its site, a medieval palace which housed Scottish royalty on their visits to London.
The staff of Scotland Yard was responsible for the protection of important individuals, community patrols, public affairs, recruitment and personnel management. When the Yard sent out its first plainclothes police agents in 1842, the public felt uncomfortable with these "spies" on the streets. But the force's role in several important cases, and the charisma of many of its detectives, helped it win the people's trust.
One such personality, Inspector Charles Frederick Field, joined the force upon its establishment in 1829. He became good friends with Charles Dickens, who occasionally accompanied constables on their nightly rounds. Dickens wrote a short essay about Field, "On Duty With Inspector Field," and used him as a model for the all-knowing, charming Inspector Bucket in his novel Bleak House. Field retired as a chief of the detective branch in 1852.
In 1877, four out of the five heads for the detective branch were brought to trial for conspiring with criminals in a betting scheme. In an effort to repair the force's tarnished reputation, Howard Vincent submitted a restructuring proposal to the force. Soon Vincent was appointed director of criminal investigations and he reorganized Scotland Yard, strengthening its central unit. And with that, the Criminal Investigation Department (CID), a respected unit of plainclothes police detectives, was born.
Blood Work
The turn of the century saw many monumental events at Scotland Yard. Britain's "Bloody Sunday" occurred on November 13, 1887, when 2,000 police officers disrupted a meeting in Trafalgar Square organized by the Social Democratic Federation, resulting in more than 100 casualties. A few years later, the force moved to its new building on the Victoria Embankment. The premises became known as New Scotland Yard.
Also during this time, one of Scotland Yard's most durable detectives, Frederick Porter Wensley (a.k.a. "the weasel"), began his 40-year post. Wensley joined the force in 1888, and his career was highlighted with many landmark cases, including the murder of 32-year-old French woman Emilienne Gerard, also known as the "Blodie Belgium" case. On the morning of November 2, 1917, street sweepers found Gerard's torso along with a note reading "Blodie Belgium." Wensley questioned Gerard's lover, Louis Voisin, asking him to write the message "Bloody Belgium." Voisin made the same spelling error, sealing his guilt.
Rest of story.
Posted by Jan at 7:36 PM