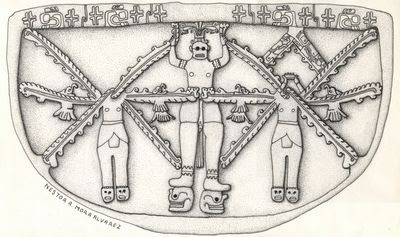 From MySAcom
Ancient Mexican city raises questions about Mesoamerica's Mother Culture
Web Posted: 10/11/2007 05:17 PM CDT
Tracy L. BarnettExpress-News Travel Editor
TAMUIN, Mexico — Deep in the Huastec jungle the enormous carved stone monolith stands, suspended over the pool of water where a team of archaeologists discovered it. A powerful woman stands at the center of the carving, flanked by two smaller decapitated women. A stream of liquid flows from the headless women toward the woman in the center.
The women on each side are thought to represent priestesses, and the liquid represents the life force, while the woman at the center represents Mother Earth; so the priestesses seem to be nurturing the Earth with their life force. The truth is, however, nobody knows for sure what these stones mean.
One thing is fairly certain — because of the recurrence of the number 13, the monolith seems to be a lunar calendar of some sort. That's why it set the archaeological world abuzz with discussion when it was unveiled last November. It is believed to have been created around 600 B.C. — 2,000 years before what was previously the oldest discovered calendar in the Americas, the Aztec Calendar, which dates to A.D. 1400.
"What this discovery did was to force us to stop, turn around and dig deeper into the history of the Huastecan groups to re-evaluate them," said Guillermo Ahuja, the lead archaeologist at Tamtoc who discovered the stone tablet, or Monolith 32, as it's called. "The problem is that there's been so little investigation into the Huastec cultures that we really lack a complete vision."
The discovery was especially surprising given that the Huastec people were thought to be a relatively recent culture. Now archaeologists are wondering whether the Huastecs — or their predecessors, the Proto-Huastecs — might have played a bigger role in the development of Mesoamerica than previously thought. It has also raised questions about whether the Olmecs might have had an influence in the region, since there are cultural similarities, or whether there might have been a third group of people, the so-called Mother Culture, that dominated the area first.
What is known is that Tamtoc was inhabited by a sophisticated people who enjoyed a high standard of living for the time, with one of the most sophisticated hydraulic systems in Mesoamerica. It was first excavated by a group of French archaeologists in the 1960s, but their project was short-lived, and work did not begin on the site in earnest until 2001. It's the only major Huastec archaeological site, and like the Huastec people themselves, it is shrouded in mystery.
The intricate carvings the Huastecs left on the stones leave clues to a culture in which women clearly played a strong role as governors, priestesses and warriors.
"Not just in Tamtoc, but throughout the Potosí region, we have found representations of women dressed as warriors," Ahuja says. "We have a very constant presence of women in the ceramic figurines that have been found, as well as in the stone monuments, which makes me think that the women were participating politically in the decisions of the group. They were an important part of the political life of this society."
The monolith was discovered in a graveyard surrounded by the remains of 84 women — 90 percent of all the remains discovered there. Ahuja has pieced together a story that might explain why.
The monolith seems to have been toppled from its original location, broken into pieces and covered with mud. Ahuja estimates the time period at about the same time that several coastal cities were flooded, probably by a tsunami-type surge, around 300 B.C.
Ahuja believes the sacred tablet was impossible to resurrect, and the people decided to let it lie and create a sacred site where it was buried. The most honored and sacred members of that society were permitted to be buried there. Women became goddesses when they gave birth, and those who died in childbirth were deified, and so they were allowed to be buried along with the Great Mother.
An important item backing this theory was another find: a headless woman's naked figure, carved of limestone and polished to a high sheen. The figure, found in a pool that once stood at the feet of the monolith, was believed to be an offering to the gods. The raised dots on her arms and legs correspond with the number of days in the lunar calendar, according to archaeologist Ricardo Muñoz, while the width of her hips and the fullness of her breasts indicate a woman at the height of her fertility.
With only six years of excavation and analysis behind them, there are many secrets yet to be unearthed, and Ahuja and his team are enormously excited at the possibilities — discoveries that might contradict much of what historians think they already know about ancient Mexican history.
"It really surprised me to learn how little is known about the Huasteca," he said. "It's really the ideal thing for any archaeologist to discover a civilization that nobody knows."
Posted by Jan at 9:08 AM