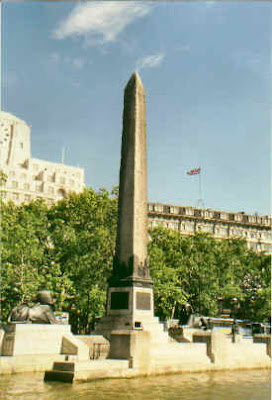 There are three "Cleopatra's Needles" (0belisks) from ancient Egypt that were given as gifts from Egypt to England (London), France (Paris) and the United States (New York). A fascinating story from the Timesonline about the transport of the London obelisk:
December 16, 2007
Steady as she goes: the day Cleopatra’s Needle arrived in London
IT required some true Victorian ingenuity to bring Cleopatra’s Needle from Alexandria to the banks of the Thames.
Photographs to be auctioned next month show it in the final stages of its trip, encased in an iron cylinder, having been transported some 2,000 miles from Egypt in a specially built vessel.
The rare photographs, dating from January 1878, capture the moment when the 69ft-high, 187-ton red granite monument was lifted onto its site on the Thames Embankment.
It had survived an eventful journey. It was given to Britain by Mehmet Ali, the Albanian-born viceroy of Egypt, to commemorate Lord Nelson’s victory over Napoleon in the battle of the Nile in 1798, but the vessel carrying it was caught up in a storm and had to be abandoned before it was safely towed to harbour.
Etched with hieroglyphs, it became known as Cleopatra’s Needle because of its association with her home city, Alexandria, even though it was made in Egypt for Thotmes III, the pharaoh, in 1460BC, about 1,400 years before her reign.
The archive, whose owner wishes to remain anonymous, is expected to raise £20,000 when it is auctioned by the Exeter-based Hampton & Littlewood. It also includes letters that belonged to Waynman Dixon, one of the people responsible for transporting the 3,500-year-old obelisk to Britain.
Rachel Littlewood, a director of Hampton & Littlewood, said: “The photographs chart the progress of the Needle as it was lowered into a 93ft-long cigar-shaped container ship called the Cleopatra.
“On October 14, 1877 disaster struck in storm-force seas in the Bay of Biscay. With the Cleopatra in danger of sinking, the steam ship Olga, which was towing her, sent six volunteers in a boat to take off the Cleopatra’s five crew and skipper. But the boat was swamped and the volunteers drowned.
“Eventually the Olga cut the tow rope, leaving the Cleopatra adrift in the Bay of Biscay. It remained afloat and was spotted five days later floating peacefully off the northern coast of Spain. It was towed into Falmouth, Cornwall, and from there to the Embankment in London.”
More information from HistoricUK.com.
Posted by Jan at 4:16 PM