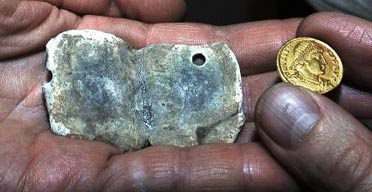 The PAS has been a resounding success in Great Britain since enacted, but it's now under threat:

Some 1,650 years ago someone was so comprehensively fed up with the state of the Roman empire that they committed an act of treason, blasphemy and probably criminal defacing of the coinage. They cursed the emperor Valens by hammering a coin with his image into lead, then folding the lead over his face.

The battered scraps of metal discovered by Tom Redmayne, an amateur metal detector, in a muddy field in Lincolnshire are a unique find.

The mid-fourth century was a time of turmoil in Roman Britain. A Roman aristocrat, Valentinus, had been exiled to Britain where he was stirring up trouble.

Thousands of Roman cursing charms survive, scrawled on pieces of lead with a hole punched to hang them up. Many were found thrown into the hot springs in Bath, demanding revenge on those guilty of petty theft.

Nothing as audacious as cursing an emperor has ever been found before. However, Sam Moorhead, a coins expert at the British Museum and expert adviser to the Portable Antiquities Scheme, which encourages voluntary reporting of finds, is convinced it is the only explanation.

Redmayne's find is unprecedented, but is just one of a torrent of 300,000 valuable, fascinating or downright weird object finds reported by amateurs in the 10 years since PAS was created.

It is a time of turmoil for the scheme itself. Leading and amateur archaeologists are joining forces to lobby the government to ring-fence its funding. Lord Renfrew, retired professor of archaeology at Cambridge, calls on the culture department to transfer PAS and its funding to the British Museum, which is facing a budget cut of 25% in the wake of the recent government spending review.
Posted by Jan at 8:04 PM