Follow-Up: Antiquities Fraud Back in the News 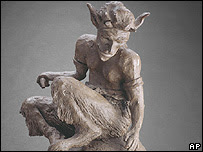 Here's a follow-up to a recent post from BBC News:
British forger fools US museum
December 13, 2007

A sculpture which has drawn crowds to a Chicago museum has been unmasked as a fake created by a British forger.

But it was created by Shaun Greenhalgh, from Bolton, Greater Manchester, who was jailed last month for fraud. His mother, Olive, received a suspended sentence for fraud. His father, George, 84, will be sentenced later.
The institute's director of public affairs, Eric Hogan, told the Chicago Tribune: "No one could think of any other instance in which anything like this happened here."
Last month, British police said the Greenhalgh family were behind "the most sustained and diverse" art forgery case ever. The family had conspired to defraud art institutions between June 1989 and March 2006. All three admitted fraud and money laundering at Bolton Crown Court in November.
Following the court case, police said they had evidence of a forged Gauguin ceramic, although they did not know its whereabouts. This prompted investigators from the Art Newspaper to step in.
It revealed that the half-man, half-goat ceramic figure in Chicago was a fake. Mr Hogan said "everyone who bought and sold [the work] did so in good faith", and the institute did not "have experience in this area".
Shaun Greenhalgh passed off scores of faked artefacts and artworks as genuine. Last month he was jailed for four years and eight months. His 83-year-old mother was given a 12-month suspended sentence for her part in the con. And his father will be sentenced after medical reports.
The trio made about £850,000 ($1.74m) from the sale of art and antiques. Bolton Council paid thousands of pounds for the so-called Amarna Princess believing it was 3,300 years old - but three years later experts found it was counterfeit. The statue was said to represent one of the daughters of Pharaoh Akhenaten and Queen Nefertiti, the mother of Tutankhamun.
The scam came to light after George Greenhalgh presented three faked Assyrian reliefs - ancient stone wall art - to the British Museum for examination in 2005. Errors in the cuneiform script - in effect, spelling mistakes - prompted museum officials to doubt their authenticity. They alerted the Metropolitan Police's Art and Antiques Unit which began an investigation.
Posted by Jan at 1:01 PM