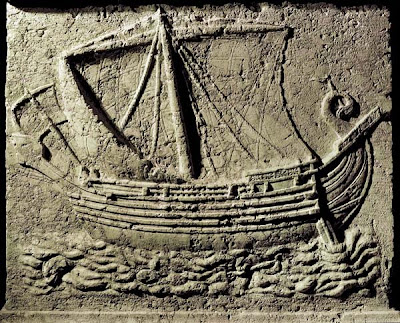 The intrepid and incredibly brave folk who first travelled the seas thousands of years in little more than canoes have always fascinated me, as have the tales I grew up with studying history (my favorite subject) about the "first" explorers (all European, of course), to circumnavigate the globe, including Columbus whom, we are still taught, discovered America in 1492. (Image: Erich Lessing
A Phoenician trade ship as depicted on a second-century sarcophagus. Looks like a better ship than the Nina, the Pinta and the Santa Maria!)

Now, the historical record is slowly being fleshed out, thanks to new discoveries and re-examinations of old records. The Chinese may have been the first to circumnavigate the globe; the Phoenicians may have been the first to circumnavigate the continent of Africa; we now known Vikings were the first people to visit the North America - unless you count nameless Europeans from the east and nameless Asians from the west who may have travelled across ice-filled oceans to reach both shores of North America 40,000 years ago!
This teaser on a story caught my eye tonight at Biblical Archaeology Review (July-August, 2008 issue):
Return of the Ancient Mariner
Writing almost 200 years after the events in question, Herodotus records in The Histories the Phoenicians’ claim to have sailed into dangerous, uncharted waters and circumnavigated Africa. It was either a fantastic—almost inconceivable—achievement or a wild hoax. Herodotus himself doubted the claim.
Enter Philip Beale. The former British naval officer and adventurer is reopening this ancient question. He intends to vindicate the Phoenicians’ claim—and he plans to do it in dramatic fashion: Having spent months overseeing the construction of an exact replica of a seventh-century B.C. Phoenician ship, Beale will skipper a crew of 20 on a ten-month odyssey around Africa.
The Phoenician Ship Expedition will depart from Arwad, Syria (i.e., ancient Phoenicia), in August 2008 and head south. After negotiating the dangers of the Cape of Good Hope at the southern tip of Africa, a critical point in the expedition, the voyage will continue up the west coast of Africa, through the Straits of Gibraltar and across the Mediterranean to return back to Syria in June 2009—ten months later and 17,000 miles wiser.
Posted by Jan at 9:41 PM