Is the Phaistos Disk a Fake??? 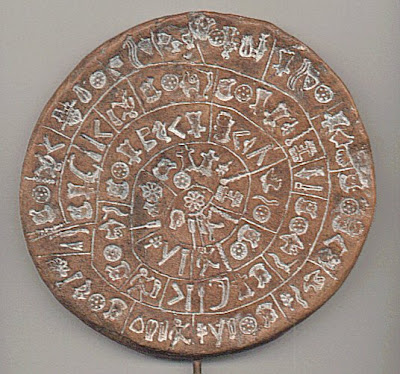 Whoa! The Phaistos Disk a fake?

From The Timesonline
July 12, 2008
Phaistos Disc declared as fake by scholar
Greek authorities will not allow the disc to be examined outside its case to not show enlarge option
Dalya Alberge, Arts Correspondent

Some say that its 45 mysterious symbols are the words of a 4,000-year-old poem, or perhaps a sacred text. Others contest that they are a magical inscription, a piece of ancient music or the world's oldest example of punctuation.

But now an American scholar believes that the markings on the Phaistos Disc, one of archaeology's most famous unsolved mysteries, mean nothing at all — because the disc is a hoax.

Jerome Eisenberg, a specialist in faked ancient art, is claiming that the disc and its indecipherable text is not a relic dating from 1,700BC, but a forgery that has duped scholars since Luigi Pernier, an Italian archaeologist, “discovered” it in 1908 in the Minoan palace of Phaistos on Crete.

Pernier was desperate to impress his colleagues with a find of his own, according to Dr Eisenberg, and needed to unearth something that could outdo the discoveries made by Sir Arthur Evans, the renowned English archaeologist, and Federico Halbherr, a fellow Italian.

He believes that Pernier's solution was to create a “relic” with an untranslatable pictographic text. If it was a ruse, it worked. Evans was so excited that he published an analysis of Pernier's findings. For the past century innumerable attempts have been made to decipher the disc. Archaeologists have tried linking them to ancient civilisations, from Greek to Egyptian.

Dr Eisenberg, who has conducted appraisals for the US Treasury Department and the J. Paul Getty Museum, highlighted the forger's error in creating a terracotta “pancake” with a cleanly cut edge. Nor, he added, should it have been fired so perfectly. “Minoan clay tablets were not fired purposefully, only accidentally,” he said. “Pernier may not have realised this.”

Each side of the disc bears a bar composed of four or five dots which one scholar described as “the oldest example of the use of natural punctuation”.

Dr Eisenberg believes that it was added to lead scholars astray — “another oddity to puzzle them, and a common trick among forgers”. The Greek authorities have refused to give Dr Eisenberg permission to examine the disc outside its display case, arguing that it is too delicate to be moved.

His misgivings could be laid to rest by a thermoluminescence test — a standard scientific dating test — but the authorities had refused, he said. In Rome, this test cast doubt recently on the provenance of another iconic archeological object.

Experts are now contending that the Capitoline Wolf, the famous bronze sculpture of a she-wolf suckling Romulus and Remus, founders of the city of Rome, dates from the Middle Ages, and not Etruscan times, as long has been held.

The Capitoline Museum's website says that the statue, known as Lupa, or she-wolf, is from the 5th century BC and was donated to the museum in 1471 by Pope Sixtus IV.

However, in a front-page article this week in the Rome daily a Repubblica, Adriano La Regina, who for decades headed the national archaeological office for Rome, suggested that the museum was reluctant to release test results indicating that the bronze was medieval.

“The new information about the epoch of the Capitoline bronze has been held back for about a year now,” La Regina wrote. He added that the tests had produced a “very precise indication in the 13th century”.

The 30in (75cm) bronze is the centrepiece of a museum room named after it, and postcards and T-shirts with its image are popular Rome souvenirs.

Claudio Parisi Presicce, the museum's director, insisted that his institution was not trying to hide data that could subtract centuries from the she-wolf's antiquity, saying that the data “aren't definitive yet”.
Posted by Jan at 7:58 PM