It's hot, it's steamy, and more thunderstorms are on the way. We got between 2 to 4 inches of rain last night into this morning; it kept coming in waves and didn't stop until about 8:00 a.m., as I was half-way into the office on the bus. Unfortunately, I was already soggy by the time I got to the bus stop, as it was pouring rain during my 3/4 mile walk from hearth to bus! And I was groggy on top of it because, as if the first wave of storms wasn't bad enough (hit around 7 p.m.), the second wave that hit around 2 a.m. kept me up for the rest of the night. Oh well.

Amazingly, I could not find a report on how much rain, exactly, we got overnight - it's as if it is a big dark secret. Come on - rivers are still overflowing their banks here and I heard this morning on the news that most of them won't be back to "normal" until November! We've already had over 33 inches of rain for 2008! As I understand it, our "normal" average is about 30 inches a year! On the plus side, my rain gutters had a much-needed cleaning and even with the strong storms (lots of thunder and even more lightning, goddess, I hate lightning) last night, as far as I could tell there was no Niagra Falls on the deck out back from a clogged overhead rain gutter! One must be thankful for small blessings.

Some things to ponder:

Here's a story for all those who still deny that "global warming" (or whatever the hell you want to call what is going on with our dramatic climatic changes) - is real! Ha! Ask the people who lost their houses in the June floods whether climate change is real or not. Ask the farmers here with flooded-out fields and no signs of any relief soon. By the way, more severe storms and rain (lots of rain) are expected tonight. Then we get a break, supposedly starting tomorrow at noon when the latest "front" blows out of here toward the east - until Wednesday, when three more days of non-stop severe storms are forecast. Nah, there's no such thing as climate change...

Antarctic Ice Shelf All But Lost: A vast shelf of ice in Antarctica is hanging on to the continent by a thread and is not expected to survive, scientists announced today.

The Wilkins Ice Shelf is experiencing further disintegration that could collapse an ice bridge connecting the shelf to Charcot Island. Since the connection to the island helps to stabilize the ice shelf, it is likely the breakup of the bridge will put the remainder of the ice shelf at risk, the researchers said.

The disintegration is evident in images from the European Space Agency's Envisat satellite.

Full article. Click on the graphic and get an enlarged version, which clearly shows the deterioration of the ice shelf and the new "crack" that has opened up in the lower most area of the image. If that "crack" spreads, the entire ice bridge will probably split off and wash out to sea.

What is most amazing about all of this is that it is full winter in Antarctica right now, so the ice should not frigging be melting!


Love this story: People want to build a poop-processing plant in San Francisco and name it after our dear Prez, George W. Bush. How utterly and completely apt, for a President who is full of sh*t! Naturally, the local Republican Party thinks the idea "stinks." Har! 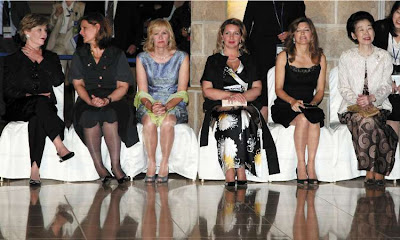 This one may awaken your binge and purge reflex: Over caviar and sea urchin (hey, I couldn't make this up) G8 leaders pig out over gourmet foods while discussing global food crisis. By the way, dig the photo of the "wives." The chick in the blue dress really looks like she'd rather be anywhere else, even Hell, maybe. Who's she married to? The hot chick in the black "slip" dress - lifting up her skirt and showing a little knee. Geez. She has to be the French wife. And what the hell is Laura Bush wearing a pants suit for? Ahhhh, I think I've got it, by jove! She's part of the Secret Hillary Sisterhood and wearing a pants suit is a sign of solidarity. Has anyone checked her checking account to see if she contributed to pay down Hillary's campaign debt???


From the Tee Hee Hee Department: He has to be a secret Republican with that "let 'em eat cake" attitude! Representative Charles B. Rangel on Friday angrily defended the unusual housing bargain he has been granted by a major real estate developer, saying that he did not believe he was being allowed four rent-stabilized apartments because of his status as a congressman.

Responding to an article in Friday’s New York Times, Mr. Rangel said there was nothing illegal or unethical about his relationship with the Olnick Organization, his landlord at the Lenox Terrace complex in Harlem. He also said that he did not believe it was unfair to avail himself of the multiple rent-stabilized apartments at a time of soaring rents in Manhattan and evictions of many rent-regulated tenants.

. . . Mr. Rangel, a towering figure in New York City politics and chairman of the powerful House Ways and Means Committee, paid a total rent of $3,894 a month for his four units in 2007, according to state records obtained by The New York Times. The Olnick Organization’s Web site now advertises similar apartments in Mr. Rangel’s building at a combined market rent of $7,465 to $8,125 a month.


Ohmygoddess! The absolutely frigging BARBARIANS! In honor of the Olympics, the Chinese are taking DOG off Bejing menus, in a futile effort to avoid offending the sensibilities of western visitors. Please, don't get me started... China: 1.1 billion and growing chowing down on man's best friend and loving it. I would suggest everyone avoid all Chinese McDonalds, where the meaning of "two all beef patties..." may have unique significance. No doubt they're looking at America even as I write this, salivating at all our beloved, pampered overweight canine buddies...
Posted by Jan at 7:23 PM