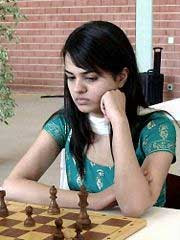 The photograph says it all. Indian men held, women lose in Chess Olympiad Dresden, Nov 22: The Indian medal hopes in the 32nd chess Olympiad suffered a severe jolt after the men could only manage a 2-2 draw with Slovenia while the women lost 1.5-2.5 to Serbia in the eighth round here. For the men, Grandmaster P Harikrishna scored over Dusko Pavasovic but on the fourth board Grandmaster Sandipan Chanda lost with white pieces against Jure Borisec. The other two boards ended in draws with Krishnan Sasikiran signing peace with veteran Alexander Beliavsky and G N Gopal achieving the same result against Lenik Luca on the third board. Among the women, Tania Sachdev and Mary Ann Gomes ran out of steam and that cost the team dearly even as D Harika struck hard on the top board for the eves and defeated Alisa Maric. Tania lost to Natasa Bojkovic while Mary Ann found her nemesis in Irina Chelushkina. The other game between Swati Ghate and Andjelija Stojanovic ended in a draw. The Indian men slipped to joint 14th spot in the standings on 11 points out of a possible 16 and now face an uphill task to keep their medal hopes alive. Armenia remained in sole lead in the open section with a 3.5-0.5 drubbing of France and took their tally to 15 points. Israel follow the leader closely on 14 points with a fine 2.5-1.5 victory over Germany while Russia and Ukraine are now joint third on 13 points each with just three rounds remaining in the biggest chess event. The Indian eves slipped to joint 10th spot after the debacle against Serbia and they too will need excellent score in the remaining matches to come within striking distance of a medal. Chinese ladies played out a draw with Ukraine on the top table and remained in sole lead on 14 points here. The four-way tie for the second spot is currently shared by United States, Serbia, Poland and Ukraine who all have 13 points apiece. Harikrishna outplayed Pavasovic from the white side of a Reti Opening. The middle game saw the Indian initiating an attack through the center and everything fell in place thereafter. Harikrishna wrapped the issue in 53 moves. Sandipan Chanda missed out some chances against Jure Borisec in a Ruy Lopez game. Playing white the Indian sacrificed a Bishop in the middle game and had a certain draw in hand. However, playing for a win proved futile in the end as Borisevic found some defensive resources and won in 54 moves. The Olympiad is an 11-round Swiss with 144 teams in the open and 111teams in the women section. Bureau Report
Posted by Jan at 7:15 PM

India just got crushed by USA 3-1.