The Mummies of Urumchi Make the New York Times! 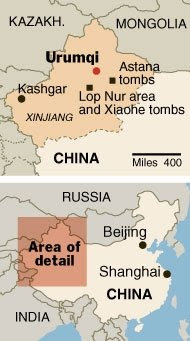 I think the author of the article "The Dead Tell a Tale China Doesn’t Care to Listen To" has a significant mistakes on conception.

'Ethnic' and 'country' are different conceptions at all. Most westerners who don't know much of Chinese histroy, may think only Han people are Chniese.
China is a big country of multi-ethnics (including 56 ethnics). The Loulan beauty is not Han ethnic, but she could be a Chinese,too.

Besides, as early as 60 BC,China's central government set up administrative organization in Xinjiang, which is the higheset-ranking official organization at that time(Han Dynasty). This local government symbolised Xinjiang is China's territory since ancient times. The presence of Zhang Qian was for trading, not for claiming to the region. Who knows Chinese histroy will understand this.

That author of the article obviously lacks of common knowledge and his thinking goes against logic. If what he said is right, then today's American should revert to indigenous Indians.

What you say is true; however, one important fact from the story was not mentioned in your post. That is - the official Chinese government continues to press a "Han" centric point of view on the ancient history of China and the outlying territories in the West. Besides the Loulan Beauty, many mummies have been recovered with fair skin and freckles and red hair - hardly Han Chinese physical characteristics! These mummies range from about 3500 years old to 1000 years old. No one is suggesting that the Tarim Basin should be attached to Iran or one of the "stan" countries - but Chinese historians and the officials in the Communist government must begin to acknowledge the cultural diversity that USED TO EXIST in ancient China. Now, it is policy to export Han ethnic Chinese to restive conquered countries and semi-autonomous territories. It is a blatant attempt to overwhelm the local populations by sheer numbers, wiping out indigenous culture and cultural identity. It is the same thing the US attempted to do with indigenous populations and the Canadians attempted to do the same. It was a shame on both countries - one I certainly acknowledge as a U.S. citizen of "caucasian" descent. What happened then was wrong, and what is happening now in China is wrong, too.

From information I've gleaned on the web on this issue has revealed the DNA tests done on the mummies shows they are of celtic origin, as well as the textile in the grave goods is identical to western European celts.