I'll see if I can find the photo mentioned in the article - it wasn't published in the article! Kurdish National Congress of North America An Embalmed Corpse of a King was discovered in Kurdistan-Iran (California, November 27, 2008). On November 19, 2008, six corpses were discovered in Kurdistan-Iran. Archeologists believe the corpses were buried some 3000 years ago. The corpses belonged to a king and five of his bodyguards, who were buried around him. [Are these bodies male or female?] According to a myth, they were buried around him to protect their king even in death. As the picture shows, the king was buried with jewelry and his crown. A fish plaque with ancient writings placed on his chest requires a scientific study by unbiased archeologists to come up with an authentic and undistorted translation of the historic message. The king’s picture shows a strong resemblance to the ones of the ancient pictures of the Medes emperors. Also, the geographical area where the corpses were discovered is situated at the heart of what was the Median Empire. Further, the burial timing ties the history to the era of the ancient Medes and their powerful and advanced empire. Ironically, the Iranian officials have tried to trivialize this historic discovery and publically proclaimed that there was no king’s corpse, but rather a 3000-year old skeleton. This flagrant denial reminds us of Iran’s continuous policies to deflect and obliterate the history of the Kurds, who by many reliable historical sources are the direct descendants of the Medes. Therefore in order not to distort this ancient history, no Iranian-government appointed archeologist should be the sole source of the translation of the writings. After the Median Empire became the Medo-Persian Empire in 550 BCE, the Medes’ culture, way of governance, and language were adapted by the Persian rulers and the Medes remained in honor and positions in the empire. However, under King Darius things gradually changed and Persian rule increased. Ever since then, the Persian rulers, ancient and modern alike, have tried to misrepresent Kurdish history and portray the Kurdish culture as Iranian culture and the Kurdish language as a branch of the Persian language. This recent Iranian effort to suppress the truth about the Kurdish history and civilization is clear evidence that the Persian rulers want to continue their ill-intended maneuver to maintain their ownership of Kurdish history and heritage. Sadly enough, when the Persians inherited the great Median Empire and Medes’ legacy, their rulers have been relentless in their efforts to keep the Kurdish descendants of the Medes oppressed. They even have been cooperating with other nations such as Iraq, Syria, and Turkey to subject the Kurds to the policies of assimilation and disappearance. In the new century, when the world is more interdependent and more aware of our common humanity, Iran and other nations that subsumed and now control parts of Media/Kurdistan need to realize that a nation of more than 40 millions cannot and will not disappear off of the face of the earth. A day will come where the Kurds, who are the legitimate descendants of the Medes, will claim their rightful place in the civilized world and will continue to contribute to its enrichment. Inquiries: 403-200-6310 Contact: Brusk Reshvan
***************************************
Added at 9:18 p.m.: I have found what I believe is the photo referred to in the above article. Here it is - from an article at Payvand's Iran News: 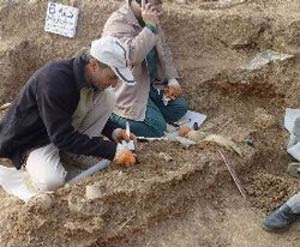 11/20/08 3,000-Year-Old Burial Ground Discovered in Kurdistan Province of Iran Source: Iranian Cultural Heritage News Agency A prehistoric burial ground has been discovered near the Iranian city of Sanandaj, which dates back to 3,000 years. Sanandaj is located in the western Kurdistan Province of Iran. According to a report by the FARS News Agency, the 3,000 year-old cemetery was found during a road construction project, that is located 500 meters from the previously found ancient mound of Zagros. Kurdistans provincial cultural heritage office confirmed that so far five squat burials have been found in the cemetery along with spears, bronze bracelets and earthenware. Excavations, which started four days ago at the site, will continue for another week, reports from Press TV indicate. Irans Kurdistan Province contains 218 natural, cultural, historical and religious sites including numerous historical villages. Ancient bridges, the Safavid Asef Divan monument and the Khosrowabad structure are among Kurdistans many tourist attractions.
Posted by Jan at 8:25 PM