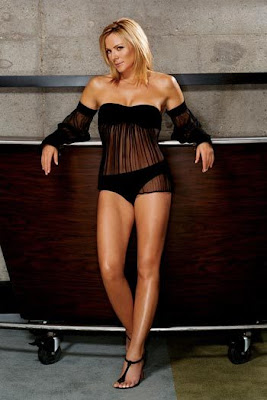 (Photo of Kim Cattrall, 2007, from the Do Something blog) What a great story! I've never seen Sex in the City - not even in re-runs! I did add the recent movie to my Netflix list and it will be delivered in due course. I remember Cattrall for remarkable green eyes and being incredibly gorgeous and a good sport in "Big Trouble in Little China." Cattrall recreates art masterpiece 4 hours ago Sex And The City star Kim Cattrall has posed semi-naked in a recreation of Titian's masterpiece Diana and Actaeon. BBC Two's The Culture Show challenged Tom Hunter to create a 21st century version of the painting after he backed the campaign to raise £50 million to keep the artwork on public display. The painting shows Actaeon, while out hunting, accidentally happening upon the secret bathing place of Diana, chaste goddess of the hunt, incurring her fury. The National Galleries of Scotland and the National Gallery, London, have until the end of the year to raise the total sum to buy it, after which time it may be sold on the open market. Cattrall, who is from British descent, is a regular visitor to the National Gallery and a huge admirer of Titian's work. She said that viewing this painting is "like being in the presence of genius... it would be a tragedy if it were not on public view". Hunter is known for his recreation of old masters and is the only photographer to have had an exhibition at the National Gallery. He rose to the challenge of recreating Diana and Actaeon, enlisting Cattrall, who plays man-eater Samantha in Sex And The City, to take the starring role. Hunter said: "Kim is the perfect Diana. Just like the Greek goddess, she combines beauty with a sense of threat. She was a great sport and at 52 made an amazing Diana. She more than held her own among a room full of twentysomethings. "The picture can't of course hold a candle to the original which deserves to remain on public view. This painting is sublime and to lose it to a private collection would be a tragedy." Also featured in Hunter's version of Titian's painting are arts students from the Courtauld Institute and performers from West End burlesque show La Clique. The photograph was taken at the Arts Club in London's Mayfair. Copyright © 2008 The Press Association. All rights reserved.
Posted by Jan at 8:47 PM

That there is a whole lotta leg!:)