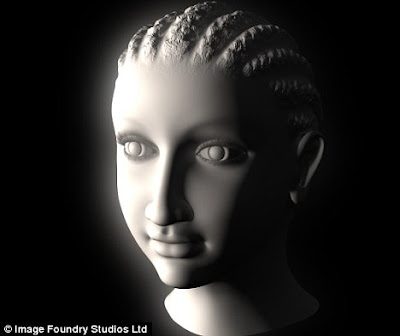 Is this computer-generated image most representative of what Cleopatra actually may have looked like? I think she looks a little too sub-Saharan African, and not enough like her Greek forebears who established the Ptolemaic line and intermarried with native Egyptians and the sons and daughters of many kingdoms around the ancient Middle East and Mediterranean. Did Egyptian queens wear corn-rows in the first century BCE? Hmmmm, I don't think so. I know - she looks somewhat like Tyra Banks! Sorry Liz, but THIS is the real face of Cleopatra By Fiona Macrae Last updated at 11:34 AM on 16th December 2008 From Elizabeth Taylor to Sophia Loren, there have been many faces of Cleopatra. But this might be the most realistic of them all. Egyptologist Sally Ann Ashton believes the compute regenerated 3D image is the best likeness of the legendary beauty famed for her ability to beguile. Pieced together from images on ancient artefacts, including a ring dating from Cleopatra's reign 2,000 years ago, it is the culmination of more than a year of painstaking research. The result is a beautiful young woman of mixed ethnicity - very different to the porcelain-skinned Westernised version portrayed by Elizabeth Taylor in the 1961 movie Cleopatra. Dr Ashton, of Cambridge University, said the images, to be broadcast as part of a Five documentary on Cleopatra, reflect the monarch's Greek heritage as well as her Egyptian upbringing. 'She probably wasn't just completely European. You've got to remember that her family had actually lived in Egypt for 300 years by the time she came to power.' The picture of the queen contrasts with several other less flattering portrayals. For instance, a silver coin which went on show at Newcastle University's Sefton Museum last year showed her as having a shallow forehead, pointed chin, thin lips and hooked nose. Her lover, the Roman general Mark Antony, fared little better. The reverse side shows him to have bulging eyes and a thick neck. The queen's appearance has long been the subject of debate among academics. While Shakespeare's Antony and Cleopatra made reference to her youthful looks and 'infinite-variety', many believe she was short and frumpy with bad teeth. A statue of Cleopatra exhibited at the British Museum in 2001 portrayed her as plain, no more than 5ft tall and rather plump. Born in Alexandra in 69BC, into a Macedonian Greek dynasty which had ruled Egypt for three centuries, Cleopatra acceded to the throne at 17. Three years later she seduced Julius Caesar, bearing him a son, Caesarion. After Caesar was assassinated she courted Mark Antony before committing suicide on his death. Legend has it that she put an asp, a venomous serpent, to her breast.
Posted by Jan at 9:10 PM