Saturday Morning and No Heart Attack!

Hola darlings! I've survived the storm - now another one is on the way. New bulges on the arms - I tell you, I WILL have Popeye arms in another week or two if this keeps up. This new storm will be a doozy, not so much because of the amount of snow that is expected (maximum a mere 7") but because of strong winds and plunging temperatures that will push sustained windchills to 35 to 40 below zero F starting later tonight, and all day tomorrow. Blowing and drifting snow is expected to cause major travel hazards locally and white-out conditions. So, I've got a lot more to do today before the storm hits - it's already noon! I got behind the time when Isis called from Las Vegas - where more snow is forecast! We chatted for a good hour at least. I slept in today, did not get up until 7:30 AM, eek! I've been shoveling. Got out at 9 AM and put in a good hour this morning in addition to the initial 40 minutes yesterday and then an hour and 15 minutes later yesterday, moving the heaviest of the snow -- clearing out the base of the driveway where the plow piled up chunks of ice and hard snow to 4 feet deep. Here's what my driveway looks like at present: 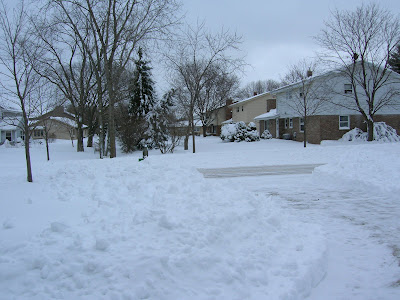 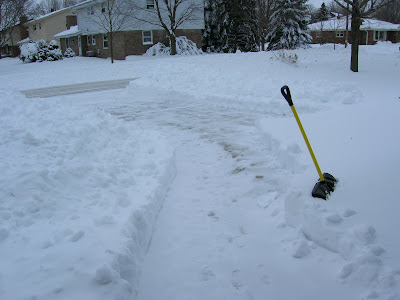 You can now barely see the mail and newspaper boxes from the front stoop now (compare to photos taken 24 hours ago) The fresh layer of snow that accumulated over the past 24 hours is also clearly visible - ha, the weather dude said "no accumulation" expected from lake effect snow, which I ALWAYS get.

The driveway is now much narrower since the last shovel-out and is also "crooked" - lol! There are also decided curves in the cleared area although my driveway is a straight shot from the road. Well, it was hard to judge where to plunge the shovel into the snow banks to start shoveling yesterday when the snow was still blowing in my face. Once I get the rest of the bulk shoveled away (starting where the shovel is buried) closest to the house and garage door (probably another hour's worth of steady hard work), I will whittle away on the sides of the snow banks to widen out the driveway area and attempt to straighten out the curves. I don't need to do this, of course, since there is no car parked in the garage that I need to drive in and out. But it's damn good exercise, both aerobic and muscle-wise. Since I'm not walking anymore during lunch-hours I need to get in what exercise I can, when I can. I still want to get down to the weight I was in November, 2003, the last time delion and I visited Las Vegas. The scale keeps fluctuating - I either have to lose 5 lbs. or 3 lbs., depending on what time of the day it is. Can I do it? Assuming we can get out of Milwaukee on 12/24, I've only got a few more days to lose those last pounds! Eek! The left shoulder is aching again - I'm very mindful of not wanting to tear my rotator cuff, so I try to get equal time in on the right shoulder, but despite my best efforts there is just no comparison.

But first I've got to hike down to the supermarket and get a few things, some wine (for moi) and nuts (for the critters), and start stocking in food for dondelion's visit, assuming he can get here. Weather is very iffy in both Montreal and Milwaukee for his Tuesday flight, we're crossing out fingers. I won't be stirring outdoors at all tomorrow other than to shovel off the deck for the critters, the weather is supposed to be that bad. The forecasters are already warning about the mini-blizzard conditions, which is bad enough. It's the 35 to 40 below zero F temperatures that most bother me. My hands freeze up in nothing flat despite investing this season in supposedly super-duper thermal gloves. Ha! Fraud! Well - at least they have a waterproof outer coating which comes in handling when shoveling because with the winds whipping around I get lots of blowback - mostly in the face but on the hands and jacket too. Arghhh! Okay - time to get a move on. Have much cleaning and then doing Goddesschess stuff to do before I'll be back here blogging. Right now, time to put the boots back on and bundle back up and head to the Pick 'n Save. I do not look forward to battling the mad crowds there, which there are sure to be! Heave Ho, Jan. Time to brave the elements once again...
Posted by Jan at 11:59 AM