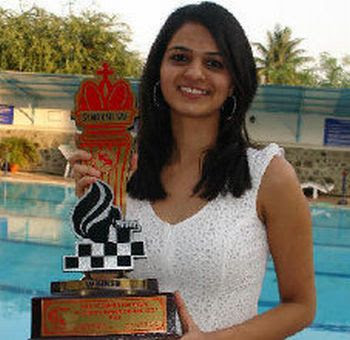 Tania Sachdev starts hot favourite at Parsvnath chess 16 Dec 2008, 2019 hrs IST, PTI Photo: Tania Sachdev with trophy from 2007 National 'A' Women's Chess Championship) NEW DELHI: Defending champion Tania Sachdev will start as the hot favourite at the Parsvnath National Women's 'A' chess championship beginning at Rusian Center for Science and Culture on Wednesday. Looking for a hat-trick, the Asian women's champion and International Master Tania will face stiff challenge in the championship from the likes of Asian Junior girls' champion Mary Ann Gomes, Swati Ghate and Kruttika Nadig besides Nisha Mohota and Kiran Manisha Mohanty. The 11-round Swiss event will have 12-players in all and the championship will be played under FIDE's round-robin league system. The drawing of lots will decide who will meet whom and when but each player will have her task cut out to make it to the Indian team for the next one year. Tania has won the previous two editions at Chennai and then at Pune last year. The Delhi player, fresh from her good performance in the Chess Olympiad and an open tournament in Croatia from where she is adding important rating points to her present ELO, is not looking to make it three in a row at home.
Posted by Jan at 9:10 PM