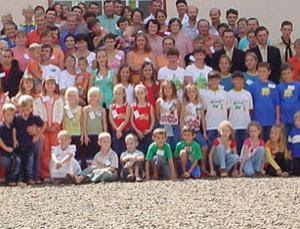 All I can say is that this is a really bizarre story... From New Scientist.com Nazi 'Angel of Death' not responsible for town of twins 15:40 27 January 2009 by Linda Geddes Brazilian scientists have rejected claims that the Nazi doctor Josef Mengele – notorious for his experiments at Auschwitz – was responsible for creating a tribe of twins in a small town near the border with Argentina. In his book, Mengele: The Angel Of Death In South America, Argentine historian Jorge Camarasa claims that Mengele made regular trips to Linha São Pedro, a small and predominantly German settlement near the city of Cândido Godói in Brazil, during the 1960s. Shortly afterwards, the birth rate of twins began to spiral, he says. However, Ursula Matte of the medical genetics unit at Porto Alegre Hospital in Brazil and her colleagues reject any notion that Mengele was responsible for the phenomenon. Her team was invited to Linha São Pedro during 1994 to investigate reports of a higher than average number of twin births in the town. Generation hop From 1990 to 1994, the proportion of twin births in Linha São Pedro was 10%, compared to 1.8% for rest of the state of Rio Grande do Sul. "Even though we could not find a definitive explanation for this higher incidence, the existence of other 'twin towns' around the world – most of them in remote isolated areas with high levels of inbreeding just as Linha São Pedro – shows that external influence is not needed for this to happen," Matte says. Her team interviewed and conducted blood tests on 17 of the 22 pairs of twins living in Linha São Pedro, around half of which were identical twins. Genealogical analysis showed a high recurrence of multiple births within families, as well as a high level of inbreeding within the community, suggesting the presence of genetic twinning factors. The high level of inbreeding, combined with an absence of twins every other generation would suggest a recessive trait, Matte adds. Teutonic traits Although Camarasa argues that the high prevalence of blonde hair and blue eyes among the twins could be evidence of Mengele's "Aryanising" influence, Matte points out that the village was founded by German immigrants who often have such features. "In addition, I don't think Mengele would have the knowledge, not to mention the means, to engender the rise in twin births in this community," she says. "It's noteworthy that twin births occurred there in almost every time period, even in the 1990s, so what kind of long-lasting manipulation could he have perpetrated?" Twin births have been linked to exposure to toxic waste and increased use of IVF, but even now, says Matte, we don't fully understand the mechanisms involved, "and it is extremely hard for me to think that Mengele would have known it in the late 1960s," she says. Journal reference: Acta geneticae medicae et gemellologiae (vol 45, p 431) If you would like to reuse any content from New Scientist, either in print or online, please contact the syndication department first for permission. New Scientist does not own rights to photos, but there are a variety of licensing options available for use of articles and graphics we own the copyright to.
Posted by Jan at 7:35 PM