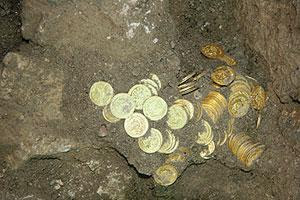 Hmmmm, seems to be an increase in reports recently about the discovery of treasure trove. This latest batch of gold coins was found in Jerusalem. From Science Daily Hoard Of Hundreds Of Antique Gold Coins Uncovered In Walls Around Jerusalem National Park ScienceDaily (Jan. 27, 2009) — One thousand three hundred year old Chanukah money in Jerusalem: a hoard of more than 250 gold coins was exposed December 11 in the excavations the Israel Antiquities Authority is conducting in the Giv ‘ati car park in the City of David, in the Walls Around Jerusalem National Park. The excavations at the site are being carried out on behalf of the Israel Antiquities Authority, in cooperation with the Nature and Parks Authority and are underwritten by the ‘Ir David Foundation. “This is one of the largest and most impressive coin hoards ever discovered in Jerusalem – certainly the largest and most important of its period,” archaeologists said. Since the archaeological excavations began there about two years ago, they have not ceased in providing us with surprising discoveries that shed new light on different chapters of the city’s past. Currently a very large and impressive building is being uncovered that dates to about the seventh century CE (end of the Byzantine period-beginning of the Umayyad period). A large cache of 264 coins, all made of gold, was discovered among the ruins of the building. According to Dr. Doron Ben-Ami and Yana Tchekhanovets, directors of the excavation at the site on behalf of the Israel Antiquities Authority, “Since no pottery vessel was discovered adjacent to the hoard, we can assume that it was concealed inside a hidden niche in one of the walls of the building. It seems that with its collapse, the coins piled up there among the building debris”. Ben-Ami and Tchekhanovets believe, “This is one of the largest and most impressive coin hoards ever discovered in Jerusalem – certainly the largest and most important of its period. For comparison’s sake, it should be noted that the only hoard of gold coins from the Byzantine period that has been discovered to date in Jerusalem consisted of only five gold coins. All of the coins bear the likeness of the emperor Heraclius (610-641 CE). Different coins were minted during this emperor’s reign; however, all of the coins that were discovered in the City of David in Jerusalem belong to one well-known type in which the likeness of the emperor wearing military garb and holding a cross in his right hand is depicted on the obverse, while the sign of the cross is on the reverse. These coins were minted at the beginning of Heraclius’ reign (between the years 610-613 CE), one year before the Persians conquered Byzantine Jerusalem (614 CE). From the moment that the first coin was exposed, it stood out against the background of its surroundings. It is easy to imagine the excitement took hold of the excavators when they continued to discover many more dozens of gold coins alongside it. These were resting on the ground, in one place where they fell, and were buried there more than 1,300 years ago, until once again man laid eyes on them – this time the amazed eyes of the archaeologists. Although gold is not among the ordinary discoveries in archeological excavations, not long ago a surprisingly well preserved gold earring, inlaid with pearls and precious stones, was discovered at this site. What is the building where this very valuable cache was hidden and who was its owner? What were the circumstances of its destruction which did not permit the coins’ owner to collect them? Should the building’s destruction be dated to the time of the hoard? The excavation of the large building in which the hoard was discovered is still in its early stages and the archaeologists hope that they will soon collect further data that will enable them to answer these questions. Adapted from materials provided by Israel Antiquities Authority
Posted by Jan at 9:56 PM