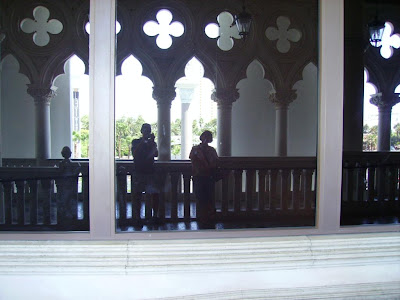 The second of my recent book orders from Alibris is here! I had received "The Tarim Mummies" by Mallory and Mair the day before Mr. Don arrived - looks absolutely fab and the illustrations and colored photographs are to die for. Can't wait to dig in. Today, while I was out huffing and puffing and sweating my butt off cutting the front lawn (even though it is only in the 50's right now, and overcast/cloudy and windy to boot, I still managed to sweat down my hair, my jeans and undies and most of my heavy-duty sweatshirt that did little to suck up my "dew." Geez!), the mail-lady appeared in her Magic Jeep and deposited my other book order - Ian Hodder's "The Leopard's Tale: Revealing the Mysteries of Catalhoyuk". OHMYGODDESS! A wealth of reading material -- not that I need any more - my reading pile is already over a foot tall. It's not a pile anymore, it's a frigging tower. Sigh. I did a big no-no - I flipped through and looked at some of the pics in the book. Oy! Only makes me regret the time I'm spending here right now letting you know these ridiculous details in my life. Meanwhile, I don't know if I mentioned it before - I signed up for Facebook, ACH. Didn't want to - I've absolutely no interest in doing that kind of stuff, but the only way I could read all the stuff that Shira has posted about the Computer Labs 4 Kids Foundation at Facebook was to sign up (at least, that is what that sneaky site led me to believe). Anyway, I did sign up and I must have done it correctly because for the past week and more I've got these "friends" - who the hell are these people? - and emails about this and that - what is this crap? I've no idea how this works and can't find any instructions how to operate it. Amazingly, Mr. Don, who had signed up a few months ago for reasons totally unrelated to Goddesschess and the Goddesschess blog - somehow found me although I do not recall telling him that I'd signed up there too, but then I may have and just forgot, my memory isn't as good as it used to be. Anyway, Mr. Don posted something to me on a Wall? What the hell is that? I've got people lined up who evidently want to be "friends" with me, people I've never heard of and wouldn't know from Adam. How can these people want to be my friends when they don't even know who I am? I haven't posted (is that what it is called?) anything there about myself until earlier today (before grass cutting), when I received email notification that Mr. Don had posted to this "Wall." So I went to Facebook and clicked on some buttons and typed some stuff. Will it show up? Who knows. At any rate, I'm just a crotchedy femme of a certain age (don't ask) and I do not want to be friends with you, okay - so back off! Is there an instruction book for Facebook? Actually - I'd much rather dig into Hodder and Mallory/Mair - and I have Michelle's gift to read too - a biography of the Goddess Athena. But I have a ton of laundry and housework to do, and I have yet to unpack my bag from the Las Vegas trip - hope I haven't grown a mold monster or something equally gross in that bag in the meantime... Mr. Don took the top photo on my b-day, August 19th, early in the day before we both subsequently wilted in the record-breaking heat that Las Vegas experienced during our visit (figures the Goddess would give us something "special" for our visit). We were headed south toward our destination , the Luxor (didn't make it that day, ran out of time before we had to be back at the hotel for other plans), and this photo was taken on that fantastic covered walkway at the Venetian. I like this photo first of all for the overall design/effect and, secondly, because it makes me look tall and sort of slender :) Mr. Don is seen with the videocam thingy in hand; I'm leaning back against the faux-stone railing, legs crossed and utterly relaxed. Note to self - in future photos, ditch the messenger bag! 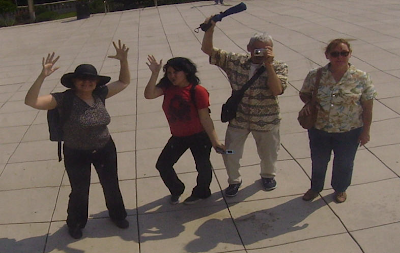 The photo is a reflection of Mr. Don and I in a blanked-out window (space for lease, if you're interested). Mr. Don tried to capture the same effect that he did so well when Isis, Michelle, Mr. Don and I visited Millennium Park in Chicago during the 2007 Goddesschess Anniversary get-together, when he captured our images reflected in that great aluminum (?) amoeba sculpture. That is one of my favorite pics and a fond memory, despite the fact that it was 95 F with high humidity and I got sunburnt to hell and back and look like shit in most of the photographs taken that day.
Posted by Jan at 12:22 PM