An Insult to the Goddess! 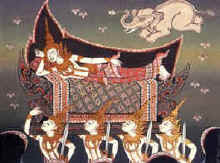 Believe it or not - reported at the Telegraph.co.uk . The image is from a Las Vegas Showgirls' article at Goddesschess. It represents Queen Mahamaya dreaming about the White Elephant the night she conceived the human prince who became the Buddha. The significance of the imagery will beocme apparent as you read the article - President Medvedev is a Buddhist goddess His 'divinity' became apparent during a visit to a monastery in eastern Siberia By Emma Hartley Published: 11:46AM BST 27 Aug 2009 President Medvedev of Russia was hailed as a goddess during an official visit to a Buddhist monastery in eastern Siberia. During the first trip in 16 years to the remote Ivolginsky monastery in Buryatia by a head of state, he was shown a statue of the White Tara, a seven-eyed, female figure in the Buddhist pantheon, whose embodiment he is believed to be, it was reported. The spiritual leader of the monastery, Pandito Khambo Lama Damba Ayusheyev, said when asked about the president’s spiritual significance: “It’s very hard to understand this for non-Buddhists and even for some Buddhists too.” Speaking to the Interfax news agency, he added: “The leader of the country is a man who bears very serious responsibility for others. The Buddhists must support him, identifying him as a deity.” White Tara is the mother of all Buddhas and is thought to embody compassion, long life, healing and serenity. She is also known as “the wish-fulfilling wheel”. Russia’s Buddhists, of whom there are between 700,000 and a million constituting less than one per cent of the population, consider the country’s leaders to be an emanation of the female Buddha. This belief dates back to the 18th century, when the Empress Elizabeth officially recognised the religion. The monastery at Buryatia is 30 kilometres from the region’s capital, Ulan-Ude, and is the biggest Buddhist centre in Russia. In addition to being hailed as a goddess, President Medvedev promised financial support to the Buddhist community while he was there and announced that he will be introducing Buddhist chaplains to the Russian Federation’s army. Geoffrey Bamford of the Oxford Centre for Buddhist Studies explained that understanding the president’s divine nature is problematic for non-Buddhists. “It’s a psychological thing that doesn’t quite have a parallel in our language. It’s philosophically based. Saying he is a goddess is a bad translation. [No it isn't - we at Goddesschess understand quite well the concept being conveyed. It's just a travesty that such a concept would be applied to such a person.] “For Buddhists he represents a bundle of qualities on the contemporary political scene. Identifying him as White Tara is a shorthand way of visualising that bundle of qualities in order to summon them up in oneself. “Medvedev’s thing is the rule of law – he’s a lawyer. [LOL! OHMYGODDESS, I can't believe Mr. Bamford actually SAID that!] He produced a remarkable state of the nation address in November last year in which he anatomised the difficulty of making a modern state out of Russia. [It's only been since the massacre of how many millions beginning in 1917 that the Bolsheviks and their successors have been TRYING to make Russia a modern state under their 'rule of law'? Was Mr. Bamford turning beet red and looking ready to explode as he said these things? Was steam coming out of his nose and his eyes popping out of his face???] It was basically about being a law-based society and this, I think, is the characteristic that the Buryats and the Kalmyks identify in him when contemplating the White Tara.” [Perhaps the modern-day Shamans of the Buryats and Kalmyks can put some spells on Medvedev and shape him up into something more along the lines of the White Tara...] Did he think that his godhead would have come as a surprise to President Medvedev? “No. He would have been briefed,” said Mr Bamford. The Russian embassy in London had no comment to make. We have a comment - chess, anyone?
Posted by Jan at 10:18 PM

...what scamps the buddhist=
potli/b(r)oth-ers are. medvyedev
is the word, metl/mead=honey=bear
in russian. nothing to do with
mahamaya of the 7 mazatl(N)=deer
eyes, her name, -maya=mayana(N)=
to be hungry. there we have the
connexion, the punter potli buds
want to be fed by the bear.
apparently, maja-=maca(N)=give,
and, -mayana=to be hungry is not
working off the first part of her name. note she is a dual goddess
of feast and famine, has in common
with chicome coatl/7 snake, the
number 7, links her to the tarot
empress/star cards, and to deer/
deor/teotl/thea7. my answer to
the prelate is we understand quite well why the bear is favored by
the latter end of the goddess, i.e., mayana(N)=to be hungry.
i don't know whether the goddess
is being insulted so much as being
asked to be useful! a last look
at 7=chicome(N)=reverse2/ome,
chico(N)=reverse and perverse,
therein the duality of 7snake and
buddha's mother, macamayana(N).

You're right, Carlos. The Buddhists are sucking up to the Big Russian Honey Bear hoping to receive a pay-off, a free meal, as you most cleverly intimated ("the punter potli buds want to be bed by the bear.")

We are dealing with two different legends about the origins of the Buddha: (1) Mahamaya dreams about the White Elephant and that night conceives (immaculately, like the Virgin Mary conceived the Lord Jesus centuries later, without having physical intercourse with a male) the prince who became the Lord Buddha; (2) the White Tara is the "mother" of all the Buddhas.

I don't know anything about Buddhist legends. Who was first? The White Tara or the Queen Mother Mahamaya? And does it matter?

I still think the Goddess is insulted by the Buddhists comparing Medvedev to Her!

...i think the stomach comes first, early myth is fairly basic,
when it begins to embroider it
means it already has priests with
time on their hands to needlepoint.
i didn't know buddha was born like jesus. now for what the white elephant means to them. to me
elephant/olliphant=ollin pantli/
pamitl(N)=flag= p/famille family,
also in chess the rolling/holy
flag is the provision cart for
the mongols. buddhists are very much in this world, like calvinists
without calvin but with hobbes,
more natural, don't have the german propensity to vandal and
gothisize with sky pie the way
the lower orders of western civ/
ciui(N)=stimulate, be in a hurry,
do, which is why we have so many
problems in america with our
home grown idealogues and our
unrealistic external polity,
we forget it's about people
and that north korea is lonely
as its leader(good work, bill).

...but you know, jan, the goddess
is never insulted...she's a goddess, she understands everything. insults are what we do,
way below her.