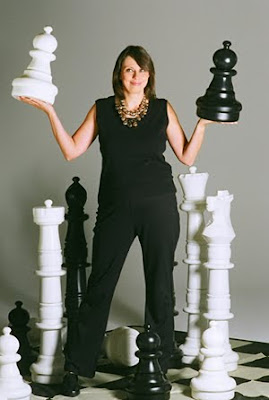 A few postscripts to this year's great event. In today's mail Goddesschess received a "thank you" from the Chess Club and Scholastic Center of St. Louis staff that included a personalized note and an inscribed and personalized photograph of WGM Camilla Baginskaite thanking Goddesschess for our support of women's chess. Nicely done and thanks a lot! We greatly enjoyed covering this year's Championship (we always do!) and we intend to sponsor another Goddesschess prize in 2010. I love this photo of Camilla Baginskaite, taken by Suzy Gorman, part of a feature article on the Championship at Chess Life Online. Several of the players took time on their free day to be photographed by Ms. Gorman. A visit this evening to the official coverage at the website for the Chess Club and Scholastic Center of St. Louis also revealed a video interview shortly after the R9 denouement, with the live coverage crew (Jennifer Shahade, Ben Finegold and Macauley Peterson) with Champion IM Anna Zatonskih ($16,000 plus winner of the Goddesschess Fighting Chess Award) and second place winner Baginskaite who scored her firm IM norm and won a spot in the next Women's World Chess Championship to be held in Istanbul, Turkey (and a prize of $12,000).
Posted by Jan at 7:50 PM